From See Jersey Blog By Matt Rooney (reprinted with permission);

It happened 45 years ago today, Save Jerseyans – October 30, 1974 – when a then-record world audience was captivated by a legendary sporting event remembered as ‘The Rumble in the Jungle.’ Underdog Muhammad Ali knocked out World Heavyweight Champion George Foreman in Kinshasa, Zaire during Round 8 of their boxing match. It’s still considered one of (if not THE) greatest bouts in history
The Ali-Foreman match is most remembered not for the result but Ali’s even-more-legendary sparring tactic introduced during the match, one which has since entered into our common vernacular: the rope-a-dope. I sincerely wish President Trump – who has a long history with the sport – would use it from time to time.
Trump is “a puncher.” One of the finest. No one punches quite like him in the American political arena at least on the “Right” side of the aisle. You call him a fraud? He shoots back that you’re a bigger fraud, and a liar, and ugly, too. Can it be traced back to Trump’s childhood? Or something he learned in the rough-and-tumble New York real estate world? Or decades as a tabloid celebrity? Who knows. Who cares? It’s irrelevant. The point is that that’s how the President wages war: he punches you 10-times for hitting him once.
And yes, generally, it’s a refreshing change of pace after years of the McCain-Romney-Jeb Bush brand of Republicans. The old guard, for all their virtues as human beings, never seemed to punch the Democrats with the same ferocity which they employed when raining hay-makers on fellow Republican/conservatives who violate our culture’s arbitrary, biased rules of political engagement (e.g. “Republicans are supposed to lead with apologies.”).
But the Trump punching strategy isn’t perfect. It arguably caries a fatal flaw: fatigue.
The entire point of the rope-a-dope is to let one’s opponent swing wildly and lose steam. Then? When they’re huffing, puffing, and ready to blow over? You help them get there… with your own well-rested fist. That’s precisely how Ali got the best of Foreman in their famous encounter.
This President never stops punching. Even when it makes sound strategic sense. For example: his opponents swung wildly with Russiagate. Made crazy claims untethered to fact. Made a big deal out of nothing. They ultimately had nothing to show the American public after months of screaming ‘the sky is falling.’ They wore themselves out and lost that battle on the points. But what did the Trumpster do? He continued talking and tweeting about Russiagate, endlessly, and then put the screws to Ukraine over Biden the Younger. 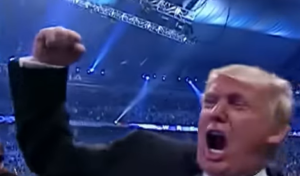 Do I think he committed an impeachable offense? Nah.
Do I think he committed political malpractice? Probably.
There’s mounting evidence that while the man himself remains an indefatigable political combatant, Trump’s 2016 suburban supporters are tired. His numbers with this crucial subset of his coalition are slipping (here and here). It’s not that they suddenly love the Democrat options. It’s more simple than that: they don’t pay very close attention, and to the casual observer there’s a clear causation with ramped-up discord within the public discourse and Trump’s presidency. You and I know it’s more complicated than all that. Your average persuadable voter isn’t looking that deeply. The causation seems clear enough.
Trump could turn it around. He knows how to get’em in the ring! The Democrats are (still) unhinged by him and his tactics and are losing their shit on a daily basis. Their off-putting obsession with Trump is eclipsed only by their 2020 presidential field’s seismic shift to the Left. Democrat leaders are worried about 2020. It looks like House Democrats know they over-reached with their ‘impeachment in the darkness’ approach.
Barring some huge ‘smoking gun’ not yet in evidence? Trump wins a priorities contrast moving forward: the Dems want to focus on transgender bathroom rights and international conspiracy theories; I’m focused on jobs and protecting your kids from the socialist nutjobs.
He CAN and might lose a punching battle. His electoral “middle” might wear out quicker than the other side’s.
I’m not expecting President Trump to suddenly start floating like a butterfly and stinging like a bee. I would hope he’s capable of at least a little self reflection; a slight but significant tactical adjustment could solidify his title as the all-time heavyweight champion of U.S. presidential politics.
–
Posted by Dan Cirucci at 7:00 AM