How NJ Republicans Can Win WITH Vote-By-Mail 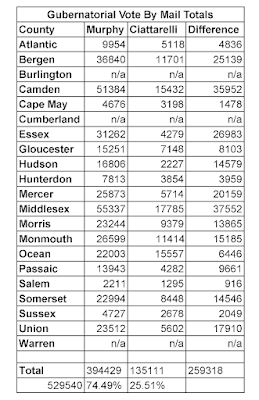 Stop The Steal - For Real

How on earth could this have happened?

With 99% of the vote in on election night this year, New Jersey Republicans were winning all across the state, from Jack Ciattarelli on down… and then, not so much.

Somehow, in the middle of the night, hundreds of thousands of Democrat votes suddenly materialized, changing the course of the election.

So many of our victories were taken from us because we were not prepared to fight back and defeat the culprit: the overwhelming voter registration advantage the Democrats have when it comes to voting by mail (VBM).

Above, right: Here's a breakdown I put together based on publicly available data that shows the VBM disparity on the gubernatorial level for 18 of the 21 counties - three counties still didn't have the info readily available.

Those midnight vote increases? Those were caused by clerk websites updating with new counts of VBM tallies, which, by statute, have to wait until after machine votes have been counted to be tabulated.

This year, I had the honor of being the campaign manager for the Legislative District 16

In our race, there were over three times as many Democrats registered to vote by mail than there were Republicans, 19,378 to 6,479. We all know that Republicans prefer to vote on election day, and vote they did - if we were just going off of machine ballots on Election Day, we’d have won the race.

Those are not the rules of the game, however, and we are not yet in a position to create a fairer, more transparent election law environment in New Jersey.

Until we ARE, we need to re-examine our VBM strategy or face more losses.

In LD16 alone, there are 20,418 low propensity Republican voters who do not come out to vote frequently, or, in some cases, at all.

In the context of a political campaign, it is very hard to invest the time and money required to reach these voters - there’s no real guarantee that they will ever show up to vote, and conventional wisdom says that you’re better off investing in trying to sway undecided voters who always vote.

But that’s only true for a political campaign of a finite length.

As we all should know by now, politics is no longer a single year endeavor. The Democrats have gotten to where they are by waging a battle of attrition, winning victories over decades and shaping the political environment to suit their needs. They’ve done this not just by passing radical election laws, but by getting their low propensity voters to sign up to vote by mail and making it priority number one to train them to get their ballots back in.

What might surprise you is that, generally speaking, Republicans who vote by mail return their ballots at a similar rate as the Democrats, roughly in the area of 60%.

If we could have gotten those 20,418 low propensity Republican voters I mentioned before and gotten 60% turnout out of them, we’d have won.

Maybe getting them to sign up to vote by mail is the solution. Maybe it’s encouraging them to vote early. Maybe it’s just a matter of communicating with them more consistently as a party year-round.

Whatever the recipe for turning these folks out is, it’s clear that there are still pathways to victory for Republicans in New Jersey - but we can’t afford to take the pressure off. We need to be out there contacting voters NOW and make sure that no matter how they do it, they come out to vote.

New Jersey’s future depends on it.