They're Leading A Home-Grown NJ Revolution 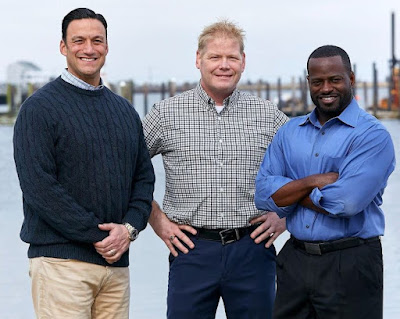 There's a revolution underway in South Jersey.
It's significant. It's serious. And, more and more it appears to be downright seismic.
It started in New Jersey's first legislative district with the stunning 2019 victory of State Senator Mike Testa and his teammates, Assemblymen Erik Simonsen and Antwan McClellan (shown, left). This tenacious trio defeated three Democrat incumbent state legislators and carried out a vow to "flip the first". This was no small feat in a huge district that spans much of the bottom portion of the state, stretching from the Delaware Bay to the Atlantic Ocean and encompassing shore towns, rural communities and Vineland which is, geographically, the state's largest city,
In flipping the first, Testa and his team defied the odds and the pollsters and won by more than 30 points. That represented an astounding 60+ point shift in votes in the district from then-Democrat Jeff Van Drew's victory. The moderate Van Drew was later elected to Congress but shortly after this political earthquake he switched parties, became a Republican and was re-elected in 2020 even though Joe Biden was handily carrying New Jersey.
With the most recent re-election of Team Testa, the first legislative district now appears to be decidedly red. And, the vivid red tide is spreading north as Republican Ed Durr ("Ed the Trucker") and his running mates have flipped South Jersey's third legislative district, delivering a knockout blow to the state's second most powerful office holder, Senate President Steve Sweeney. Beyond that, in the eighth legislative district the GOP's Jean Stanfield has defeated incumbent State Senator Dawn Marie Addiego and Stanfield carried her Assembly running mates to victory with her.
It's clear: South Jersey seats are flipping from blue to red and that even includes county commissioner seats as recently occurred in Gloucester County. This is not a passing fad. The trend is obvious: South Jersey is fed up! North Jersey may still be mostly blue but South Jersey sees absolutely no reason to march in lockstep.
Why? Because South Jersey has always had a rugged independent streak. It's a different world, a different terrain in many ways. South Jerseyans have more room to roam and they don't like being pushed around. They also don't like being taken for granted or receiving short shrift from Trenton. They're not impressed with North Jersey hotshots and, though often underestimated, they're not easily deceived. In fact, you've gotta get up damned early in the morning to fool anybody from Vineland or Millville or Hammonton or Bridgeton.
And no one epitomizes all this more that Senator Mike Testa who's rapidly emerging as a new power in Trenton and the voice of this dramatic shift. Testa is smart without being slick, savvy without being smug, charismatic without being enigmatic. These characteristics are rare in a politician, especially one so relatively young. As an attorney Testa is no doubt analytical but he's also naturally instinctive and he isn't afraid to strategically act on his instincts. And this, too: he listens. Testa keenly focuses on what's on the minds of his constituents.
Testa's soon-to-be colleague Ed Durr claims that carefully listening to voters was key to his dramatic victory over Sweeney. Durr says when he went door-to-door on the campaign trail instead of automatically going into his pitch he listened first. That literally gave him a better sense of his ground game. It also told him that voters increasingly felt that Sweeney had lost his connection to the very people he was elected to serve.
One more thing: People like Testa and Durr understand that in the end it's guts and gusto not polls, metrics and fancy consultants that win elections.
What does all this mean for the rest of New Jersey and the New Jersey Republican Party?
To begin with it means that those who take South Jersey for granted (and those who are quick to stereotype the south) now do so at their own peril. They need to wake up to the very real issues that South Jersey voters are bringing to the table: taxes; budgetary control; education; government efficiency and government services. These go to bread-and-butter concerns such as finally getting tax relief; discovering what your kids are actually being taught in school, getting back real tangible services for the money you send to Trenton and not having to wait in line forever at the motor vehicle agency. On these fronts and more, South Jerseyans want results, not excuses.
And for the state GOP? Clearly the South Jersey revolution shows it's time for the cultivated country club clique to cede ground. Because people like Testa and Durr are too busy finding ways to win to worry about the sort of feigned civility that guarantees defeat.
Posted by Dan Cirucci at 2:52 PM