Why You'll LOVE The Horrors In This 'Little Shop'! 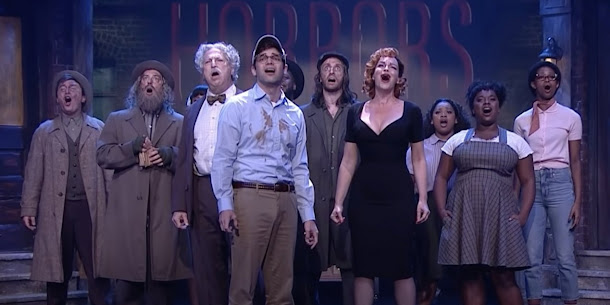 Lest you think Stephen Sondheim's Sweeney Todd invented the grim combination of murder, mayhem and music, think again. Long before Mrs. Lovett's Pie Shop there was another shop that dabbled in Broadway guts and gore and that was the Little Shop of Horrors. Of course, Little Shop of Horrors never made it to Broadway proper. A mere fraction of the size and scope of Sweeney, Little Shop opened off Broadway and there it stayed for a good long time.
Then, in 2015 City Center's acclaimed Encore series revived Little Shop with Jake Gyllenhaal in the starring role as Seymour, the endearing but ultimately menacing nebbish who works at Mushnik's troubled flower shop on skid row. While there, Seymour harbors a crush on Audrey, a coworker and also nourishes a strange plant with an insatiable appetite and a penchant for the macabre. We enjoyed the Encores production but it was difficult imaginng hunky Gyllenhaal as a spindly, bullied nerd. Also, City Center's vastness and huge stage overpowered this basically intimate show.
Now, Little Shop is back in the much smaller Westside Theatre just off Broadway where it's much more at home with a fine cast starring Broadway favorite Jeremy Jordan and featuring the always adept and multi-talented Christian Borle. Jordan actually looks the part of Seymour and Brole plays the heavy to the hilt along with a few other characters. With Tammy Blanchard as Audrey, the love interest and Tom Alan Robbins as shop-owner Mushnik and backed up by the irrepressible Urchin singers (Salome Smith, Aveena Sawyer and Joy Woods) this cast plays the whole show broadly and with such delight at being on stage and in front of a live audience again that they win you over right from the start.
Jordan is one of Broadway's most versatile actors and here, teamed with the bulgy-eyed Borle, he seems to be savoring every moment of Little Shop's journey into what becomes a blood-thirsty mess, albeit peppered with non-stop laughs. Borle and Jordan wring every bit of mugging physicality out of their roles in what is basically a grisly tale wrapped in a cartoon-style musical that can't hide its smirk.
Of course, a major nod must be given to the show's adept puppeteers who help Seymour's plant grow into a mammoth monster that overwhelms not just the story but nearly the entire stage. But since Little Shop never even tries to be a serious morality tale, the fright is all in fun.
And yet, in this era of COVID and biological warfare, well -- you may just see some pertinent warnings.
Prognosis: A delightful, perfectly-mounted hit. Don't miss it!
Posted by Dan Cirucci at 3:13 PM