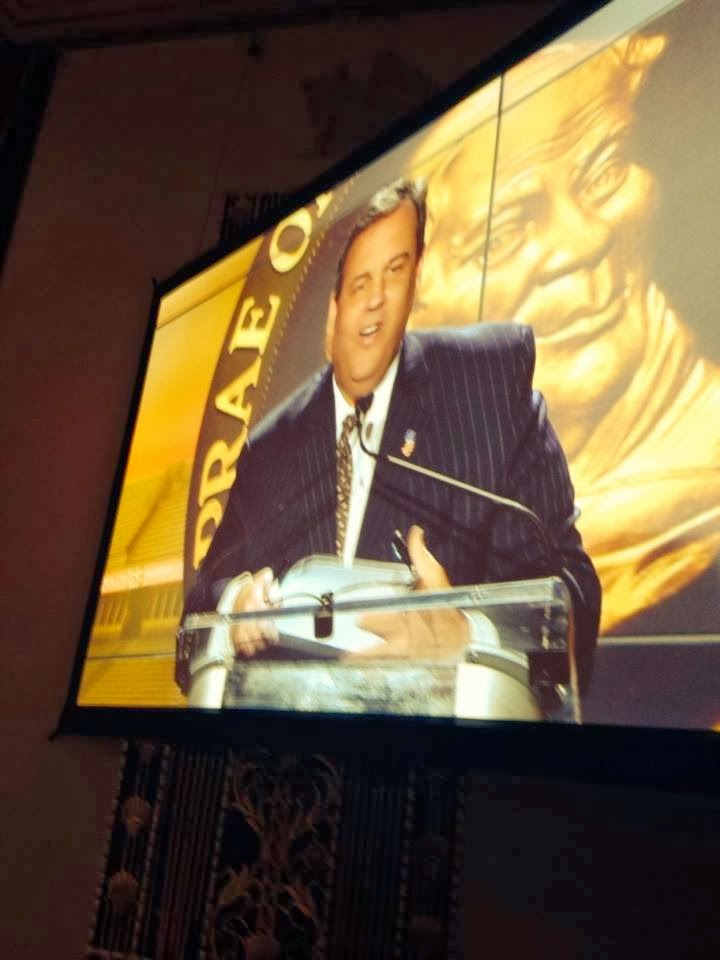 That's the motto of the famed Friars Club and it literally means fraternity forever.
And today the club welcomed a surprise guest - New Jersey Governor Chris Christie who popped into the club's Manhattan luncheon (in the ballroom of the famed Waldorf Astoria) for a Super Bowl week roast of football legend Boomer Esiason.
The appearance wasn't on Christie's official calendar and no one seemed really sure he was actually going to be there until he arrived. But our "spy" in the room (Frani Stone, the gorgeous wife of comedian/actor Stewie Stone) reports as follows:

We had a surprise guest today at the Boomer Esiason Roast.
Yes, we did. Chris Christie snuck in and did ten very funny minutes. One can see how he can charm his voters. Larry King had thought he was there in the beginning and asked him to take a bow, but he was a "no show" at that point.
When Larry realized he wasn't there he said, "I guess he got held up at the George Washington Bridge." Good line. But Christie did appear about a 1/2 hour later. The governor slipped in and slipped out, but he was definitely in the moment and gave his all on that stage. He was very comfortable. After several very funny lines he ended with the announcement of his decision to run in 2016 for the Presidency of the Football Association.

Frani (who is from New Jersey and attended junior high school with us) said she found Governor Christie to be self-deprecating and enjoyable.
Posted by Dan Cirucci at 5:10 PM