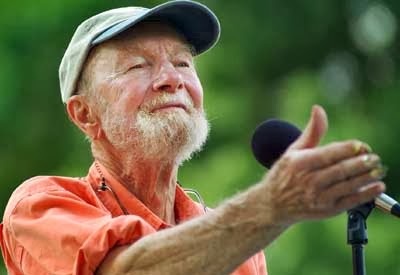 Pete Seeger was perhaps America's most beloved singer of folk songs and one of our most accomplished musicians.
He was a natural.
In fact, Seeger's banjo was like an extension of himself. You simply could not picture him without it.
But, more than that, his voice was a distinctly American voice. His cadence and phrasing, his emphasis and timing made each song come alive.
That distinctive voice has been stilled with Seeger's death at 94.
Through his performances, his actions, his commitment and the life he led, Pete Seeger demonstrated that you could disagree with your country, you could dissent and you could protest and still be a patriot.
He had a simplicity about him that many of America's current ego-anchored performers would be wise to emulate. With Pete, it was never about him. It was about the songs and the music and his colleagues and what he believed in and the land he loved. Because of his natural grace, you could disagree with Pete Seeger and still enjoy his music, still admire him, still care about him.
Pete Seeger was a national treasure.
He was at the forefront of the labor movement, the struggle for Civil Rights, the peace and anti-war movements, and the fight for a clean world. He was a beacon for hope for millions of people all over the world. Once blacklisted from national television for being unafraid to voice his opinions, he was given the nation’s highest artistic honors at the Kennedy Center in 1994. In January 1996 he was inducted into the Rock and Roll Hall of Fame.
Although he left Harvard during his second year, in the spring of 1996 he was awarded the Harvard Arts Medal, presented annually to a Harvard graduate who has made an important contribution to the arts. He won a Grammy Award for Best Traditional Folk Album of 1996 in 1997 for his Living Music recording “Pete.”
In April 2000, he was named one of America’s Living legends by the Library of Congress.
The recognition of Pete Seeger’s invaluable contributions to American culture and history continued in the 21st century. He won a Grammy Award in 2008 for his Appleseed Recording, “Pete Seeger: At 89,” and again in 2011 for his “Tomorrow’s Children” album.
Pete Seeger was chosen to sing at the January 2008 inauguration of President Barack Obama, where he sang all of the verses to Woody Guthrie’s iconic “This Land is Your Land.” He celebrated his 90th birthday on May 3, 2009 with family and friends at a sold-out concert in New York’s Madison Square Garden.
His was a life well-lived.
Posted by Dan Cirucci at 10:03 AM