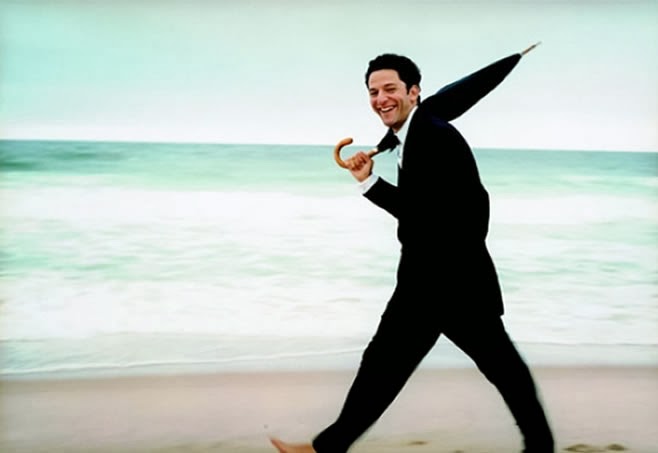 We've been at our southern command center on beautiful Hilton Head Island for a week now and we've been enjoying the relatively mild temperatures that characterize South Carolina's low country at this time of year.
We're directly on the beach and the views of the sulight sparkling on the ocean and the wide sandy beach have been absolutely spectacular. And we've stopped by many of our favorite haunts but there's no need to report all that here as we've already told you all about Hilton Head's best restaurants and other attractions.
But on Thursday evening we went to the Arts Center of Coastal Carolina for a concert featuring jazz guitar aficionado and vocalist John Pizzarelli and his quartet.
We first saw Pizzarelli at the beginning of his career and since have purchased many of his more than 40 albums. He's not only a hugely accomplished musician but he's also one of our premiere interpreters of the great American songbook. Pizzarelli showed this once again during the concert as he delivered one great tune after another.
In between the music, this charming New Jersey native regaled the audience with wonderful stories about his musical journey and all that he has learned from his famous father, Bucky Pizzarelli who's also a great jazz guitarist. In the quartet (just to vouch for everything that John relayed) was his basist and brother, Matt Pizzarelli. What a family of musical talent!
Pizzarelli has a way of telling a story that is funny, engaging and irrepressibly human. Just as with his vocals, his timing with storytelling is near-perfect. Of course, there were a few moments when we wished he had talked less and sung and played more. But then, we might not have gotten to know him nearly as well. So, it sorta all worked together.
Pizzarelli hardly needs our accolades to beef up his creds.
He's been called “Hip with a wink” by Town & Country, “madly creative” by the Los Angeles Times and “the genial genius of the guitar” by The Toronto Star. When he performed with his wife, singer/actress Jessica Molaskey, and his father,  they were labeled “the First Family of Cool” by the San Francisco Chronicle and “the von Trapps on Martinis” by The New Yorker. According to The New York Times, “the Pizzarelli-Molaskey duo are as good as it gets in any entertainment medium.”
After his recent smash success with the Boston Pops, he was hailed by theBoston Globe for “reinvigorating the Great American Songbook and re-popularizing jazz.” And the Seattle Times called him “a tour de force” and “a rare entertainer of the old school.” Before a recent show in the northwest, the local paper quipped “John Pizzarelli is so impossibly cool, he shouldn’t be legally allowed to enter Oregon.”
Using performers like Nat “King” Cole, Frank Sinatra and Joao Gilberto and the songs of composers from Richard Rodgers, George Gershwin to James Taylor, Antonio Carlos Jobim and Lennon & McCartney as touchstones, John Pizzarelli has established himself not only as one of the prime interpreters of the great American songbook and beyond, but also an expert on popular music from the 1930s, 40s and 50s to the present time. And he's appeared all over the world.
This is a guy who can perform almost any kind of music and he demonstrates this more than once in the course of an evening.
But the wonderful thing that shines through in every performance (and on nearly every album) beyond his endearing authenticity, is his love for American popular song and all the classics from the very best composers and lyricists. And with Pizzarelli's smooth, mellow, honest delivery the audience never tires of these songs.
If you get a chance to see John Pizzarelli on tour, buy tickets as soon as they go on sale. You won't regret it!
Posted by Dan Cirucci at 3:41 PM