Performances for BLITHE SPIRIT are set to begin Tuesday, December 9th at Center Theatre Group’s Ahmanson Theatre in Los Angeles with an official opening on Sunday, December 14. Following the closing of the LA engagement on Sunday, January 18th, the tour will continue on to SHN’s Golden Gate Theatre in San Francisco from Tuesday, January 20th through Sunday, February 1st; Mirvish Productions’ Princess of Wales Theatre in Toronto from Tuesday, February 10th through Sunday, March 15th and concludes in Washington D.C. fromTuesday, March 17th through Sunday, March 29th at the National Theatre where Lansbury made her first pre-Broadway stage debut nearly 58 years ago to the day. For more information, please visit www.BlitheSpiritThePlay.com.

Returning to the role of Madame Arcati, for which she won her fifth Tony Award® in 2009 for Best Featured Actress in a Play,Angela Lansbury (“Murder, She Wrote;” Sweeney Todd; Mame; “Gaslight”) will be joined by an all-star cast including Charles Edwards (“Downton Abbey,” The 39 Steps, Blithe Spirit – 2014 West End revival), Jemima Rooper (“The Black Dahlia;” One Man, Two Guvnors; Blithe Spirit – 2014 West End revival) and Charlotte Parry (Coram Boy, The Importance of Being Earnest). The cast also includes Susan Louise O’Connor (What to Do When You Hate All Your Friends, Blithe Spirit – 2009 Broadway revival) and Sandra Shipley (Anything Goes, Blithe Spirit – 2009 Broadway revival). Additional casting will be announced in the coming days. The play is directed by two-time Tony Award-winner Michael Blakemore (Kiss Me, Kate; Copenhagen).

“During the course of my career, I’ve had the good fortune to play many, many unique and wonderful roles in the movies, on stage and television,” said Angela Lansbury. “And it is a joy to once again step into the role of Madame Arcati, and bring Noël Coward’s classic comedy ‘Blithe Spirit’ to wonderful audiences here in North America who have supported me for over seven decades.”

BLITHE SPIRIT, one of Noël Coward’s most popular comedies, was first seen on Broadway in 1941, the same year it was produced in London where it set British box office records and was the longest running comedy (1,997 performances) until it was eventually surpassed by Boeing-Boeing in the 1970’s. The original Broadway production played nearly two years and co-starred Leonora Corbett, Mildred Natwick, Clifton Webb and Peggy Wood. In 1987, it was revived on Broadway in an all-star production with Richard Chamberlain, Blythe Danner, Judith Ivey, and Geraldine Page, in her final Broadway appearance.

Coward, in his autobiography, claimed he wrote the play in five days during a holiday. Only two lines of dialogue were removed before its first production in London.

Researching for his new novel, Charles Condomine invites the implausible medium Madame Arcati to his house for a séance. While consumed in a trance, Madame Arcati unwittingly summons the ghost of Charles’ dead wife Elvira. Appearing only to Charles, Elvira soon makes a play to reclaim her husband, much to the chagrin of Charles’ new wife Ruth. One husband, two feuding wives and a whisper of mischief in the air – who will win in Coward’s unworldly comedy?

Our review of the 2009 Broadway production of Blithe Spirit follows: 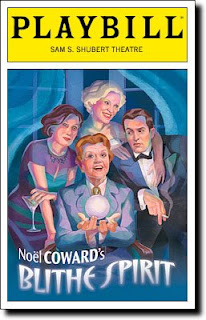 More years ago than I care to remember I saw Angela Lansbury in the pre-Broadway tryout of the musical Mame in Philadelphia.

When Lansbury danced a jitterbug number in the rollicking "That's How Young I Feel" I couldn't believe how light and adept she was on her feet.
Now, I saw Angela Lansbury in another Broadway production last Saturday.
This time Lansbury dances what the New York Times calls a "neo Nijinsky dance" where she vibrates "sometimes like a tuning fork and sometimes like wind chimes in a monsoon."
Yes, Angela Lansbury is 83 years old.
But she's still "dancing" and still stealing the show - this time as Madame Arcati in Noel Coward's classic drawing-room comedy, Blithe Spirit.
What a joy it is to see Angela Lansbury back on Broadway!
She is one of the great stage actors - one of the great entertainers - of our time. Movies, television, theatre, song, dance, drama, comedy; she does it all.
In fact, is there anything Angela Lansbury can't do?
Mame, Dear World, Gypsy and Sweeney Todd all brought Tony awards for Lansbury and she's nominated once again for Blithe Spirit.
Murder She Wrote brought her several Emmy Awards.
And who can forget her screen appearances in such memorable roles as the diabolical mother in The Manchurian Candidate?
This new production of Blithe Spirit at the legendary Shubert Theater is a winner all the way around with Rupert Everett, Christine Ebersol and Jayne Atkinson in the other starring roles. The show is finely paced and loaded with laughs.
But I must warn you: This is a classic comedy that's true to the original. It hasn't been "speeded up." So there are no dramatic scene changes, no special effects and lots of old-fashioned elements.
Which is just another way of saying, sit back, relax and take your time to enjoy - indeed, to savor, the wit of Noel Coward, the seductiveness of Christine Ebersol, the mischievous sophistication of Rupert Everett and the triple-threat luminescence of Angela Lansbury in Blithe Spirit.
Hurry - Broadway magic awaits!
Posted by Dan Cirucci at 5:15 PM