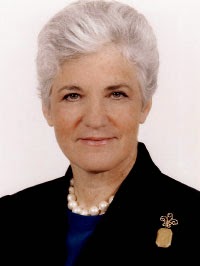 Reports are circulating that former Philadelphia District Attorney Lynne Abraham will run for Mayor
of Philadelphia in 2015.
Though she has often been courted by Republicans, Abraham would be expected to join what will probably be a large group of aspirants in the Democrat primary. So far, there's been a dearth of Big Names in the running, so when Abraham makes her formal announcement (probably after this November's election) it will be Very Significant.
Because, make no mistake about it -- Abraham is a Big Name. She's well known, she's a proven vote-getter, she attracts support across all racial, ethnic, geographic and idealogical segments and she can raise the money that's needed to mount a successful campaign.
Lynne Abraham will bring grit, gravitas and no small amount of gray matter to the job - assets that have not been much in evidence in recent years. No one knows the city better than this savvy defender of law and justice and no one loves the city more.
In fact, serving as mayor would be the culmination of an illustrious career for Lynne Abraham and you can be sure of this: She will be a scrupulously honest and relentlessly diligent mayor because that's how she's lived her life and that's what her career's been all about. She knows no other way. Integrity, hard work and an unwillingness to suffer fools gladly are her hallmarks.
She knows the people to contact, the neighborhoods to activate, the constituencies to reach and the buttons to push to make Philadelphia work -- and she isn't afraid to contact, activate, reach and push, push, push.
For all these reasons and many, many more we love Lynne Abraham and wish her the very best!
Posted by Dan Cirucci at 1:19 PM

You see, this woman actually DOES bring people together!