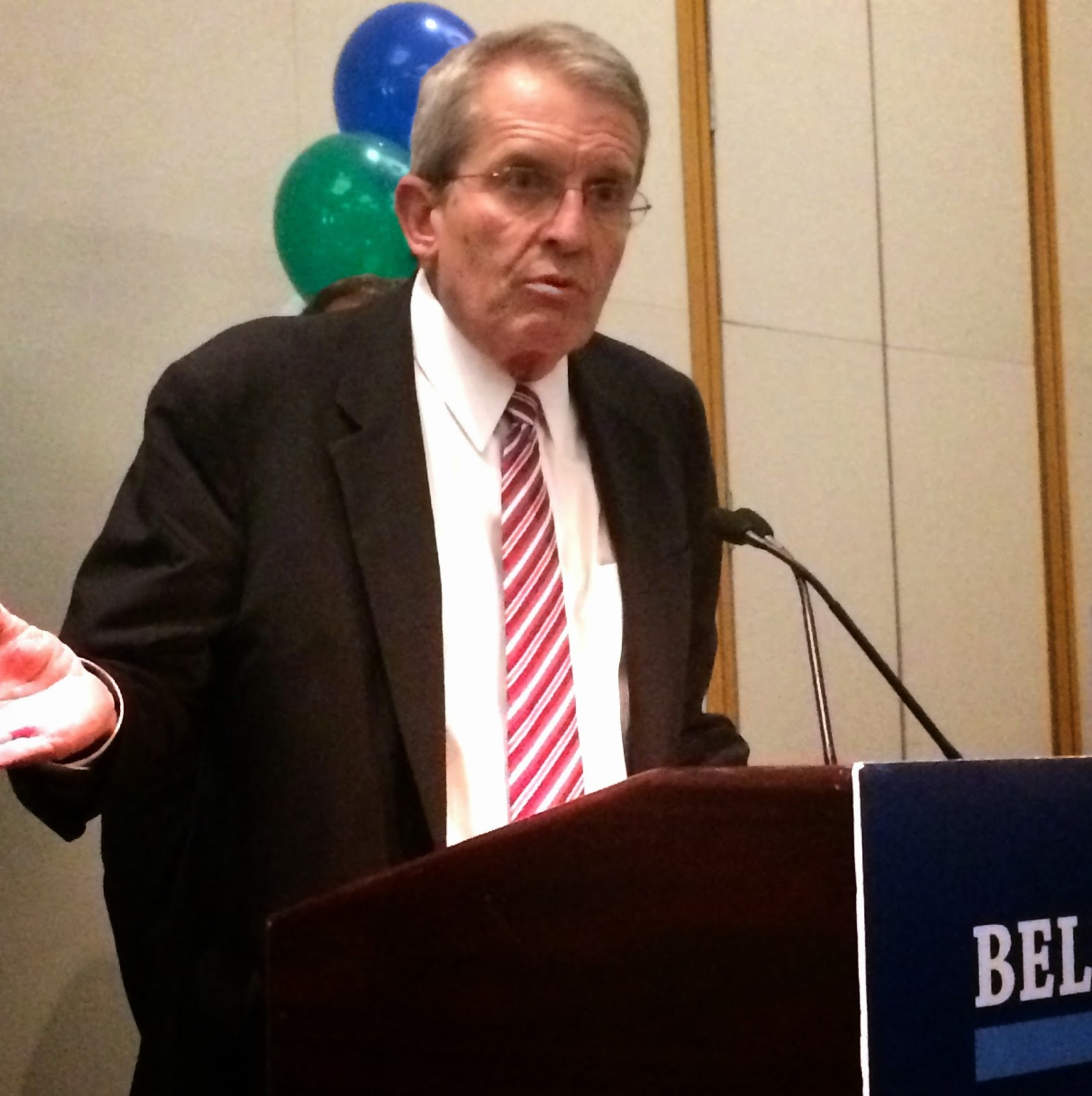 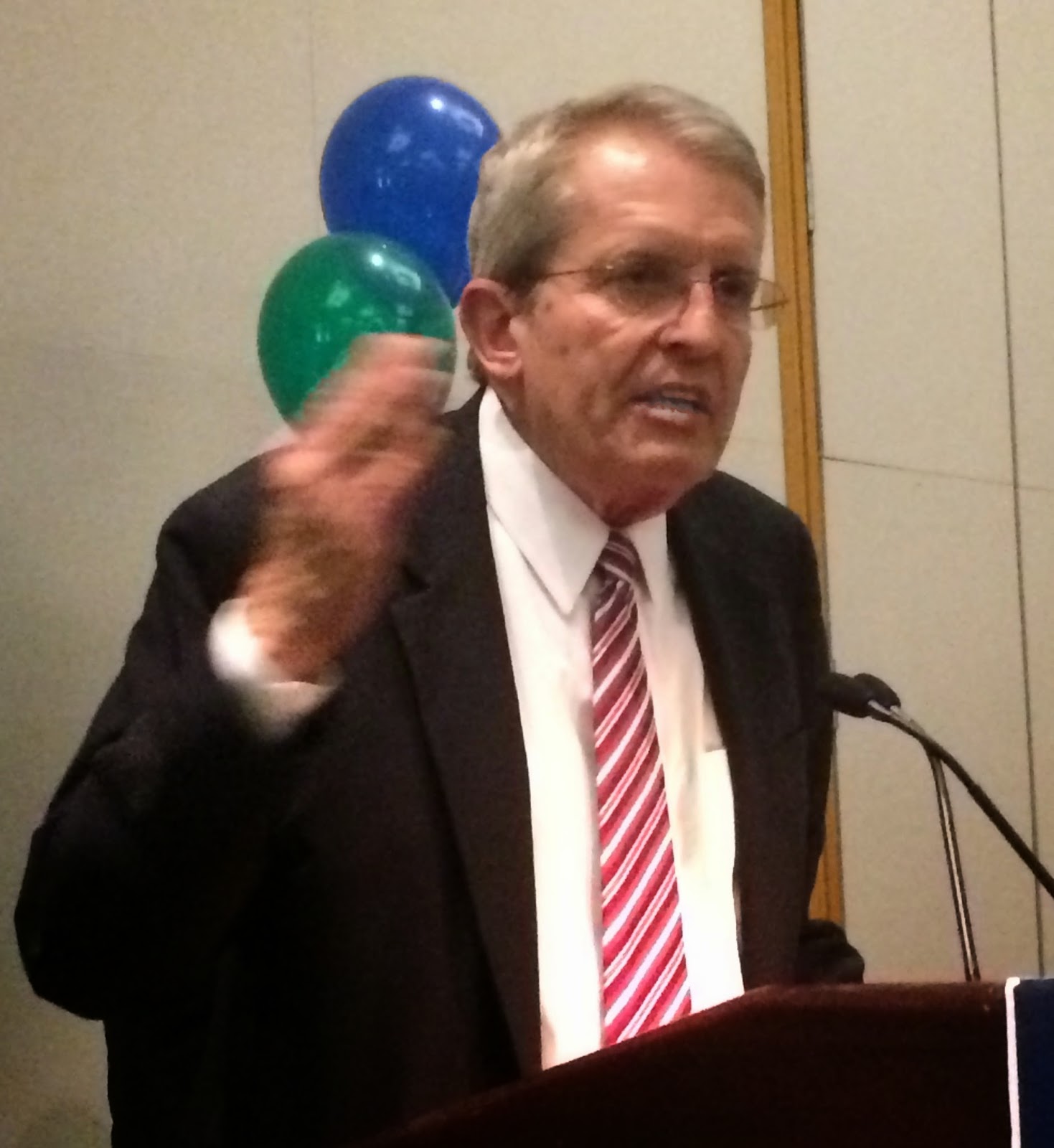 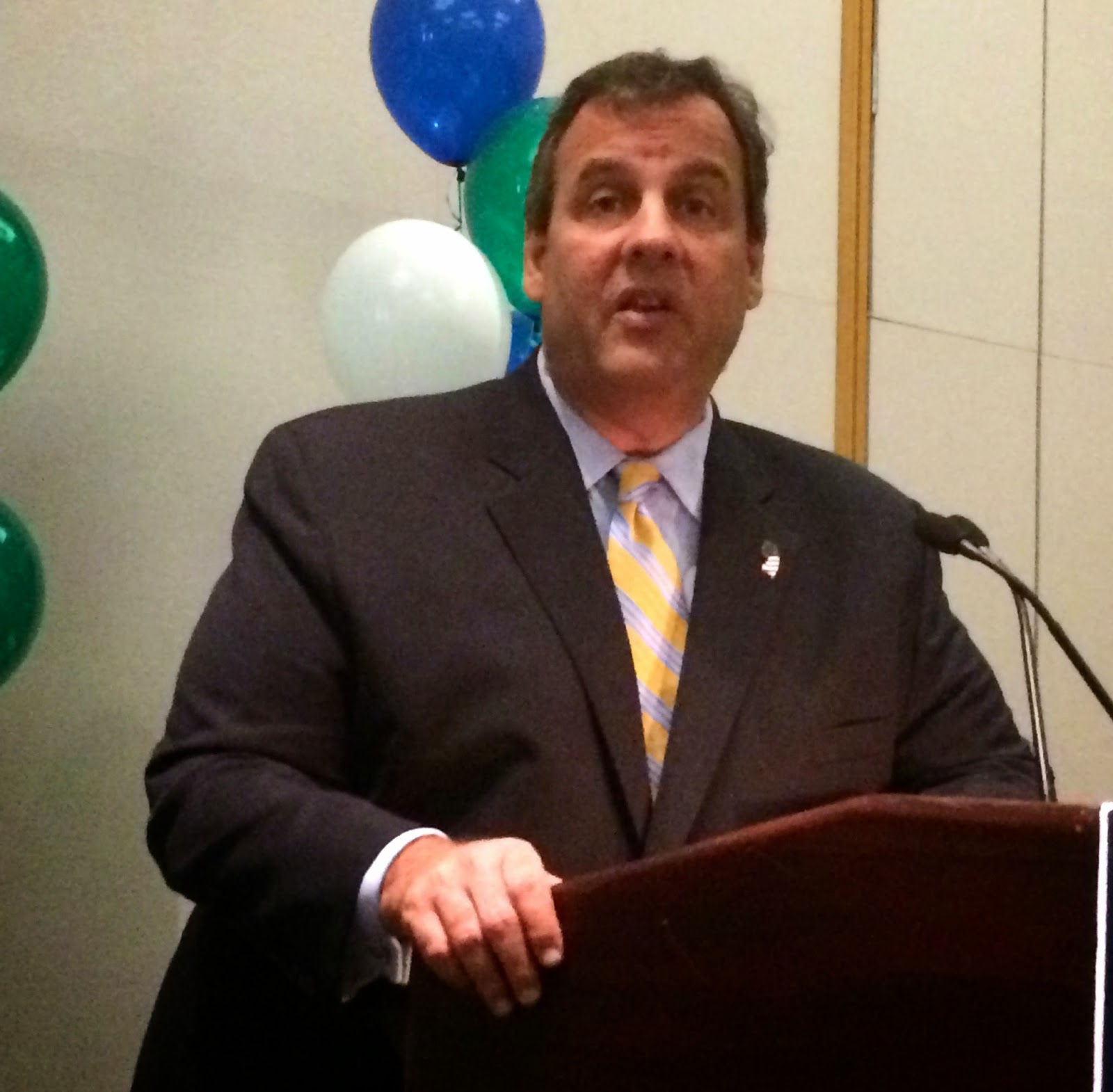 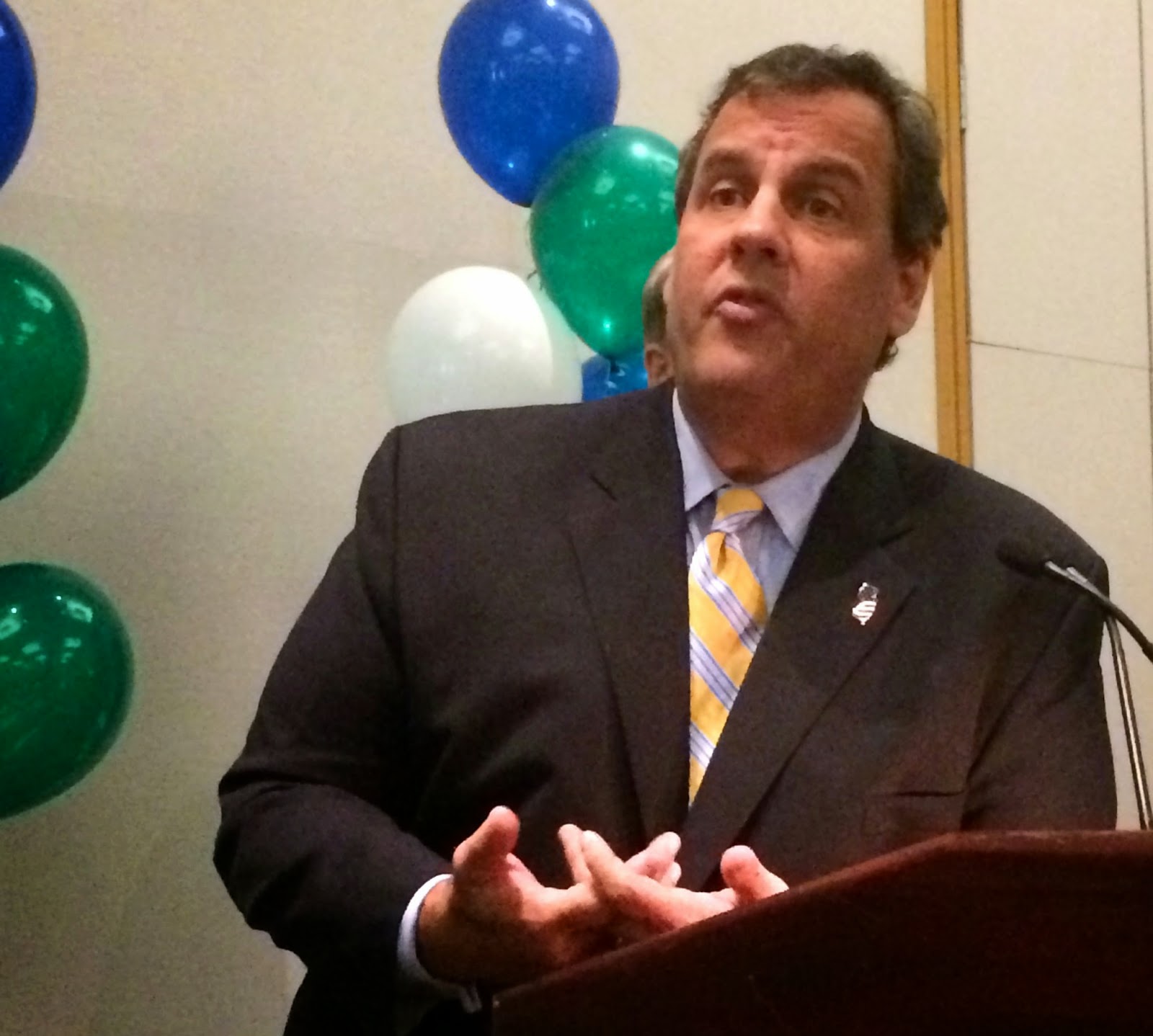 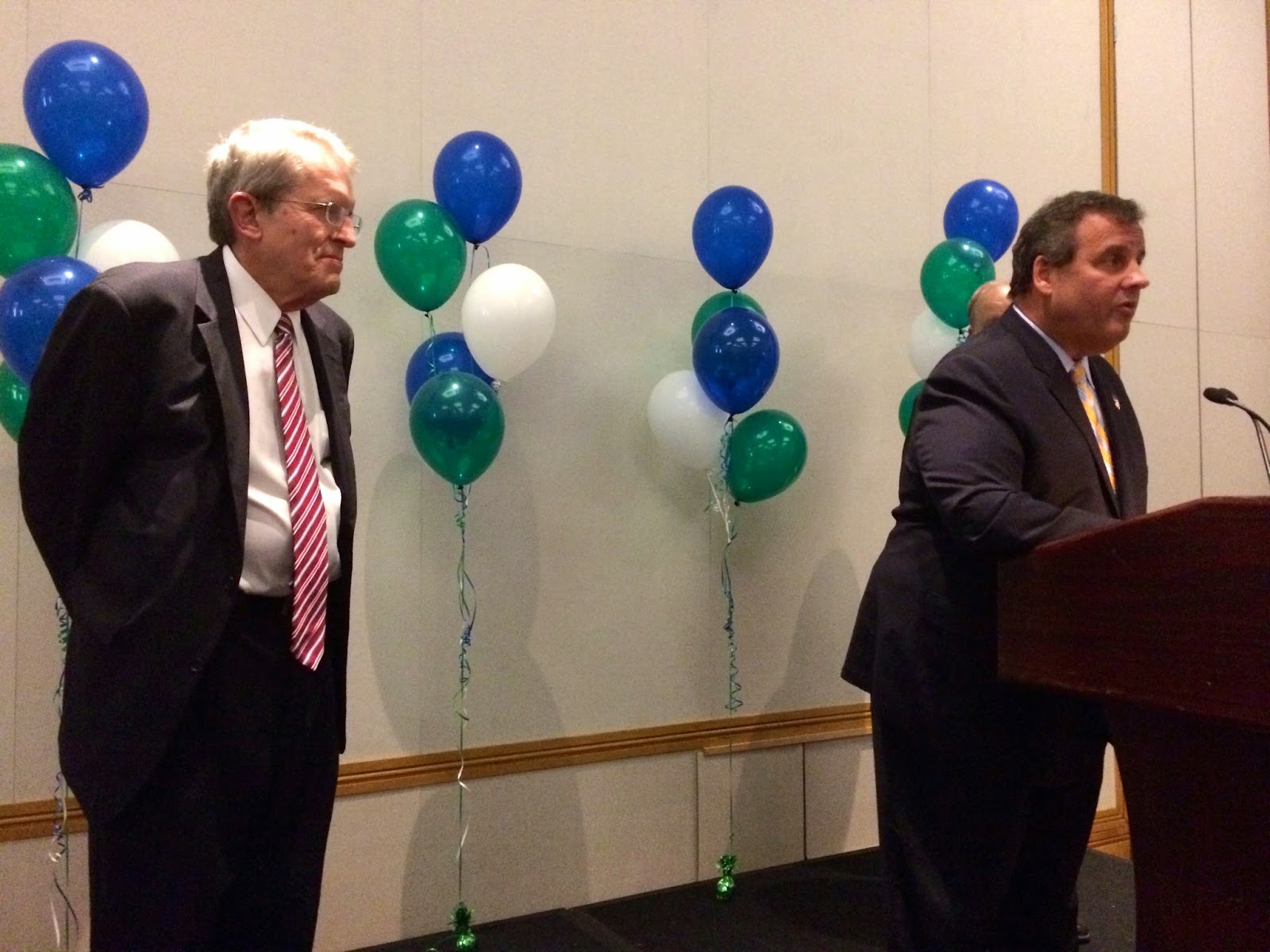 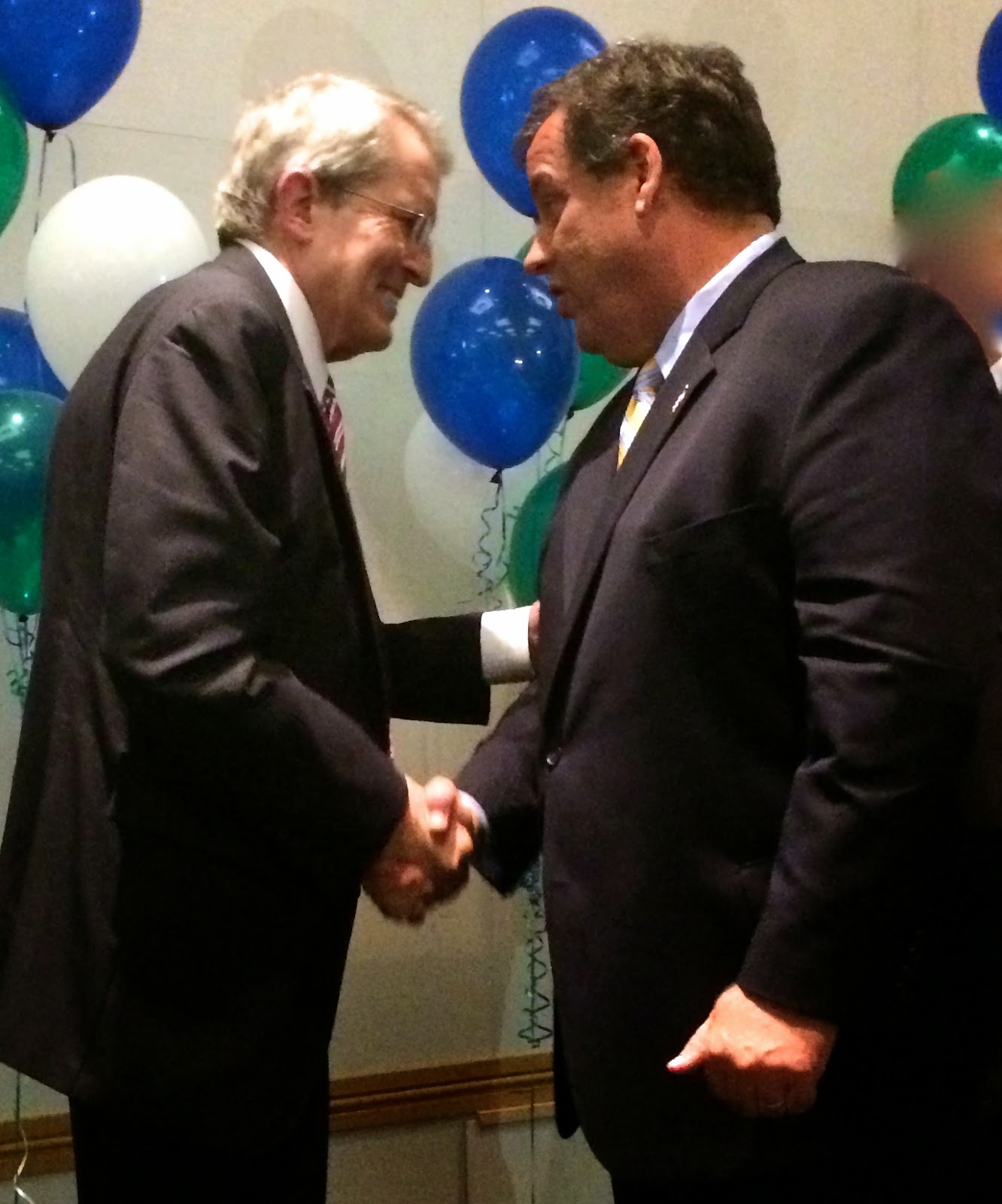 At a private event in Princeton last night New Jersey Governor Chris Christie rallied a vocal and enthusiastic group of party faithful behind the state's GOP United States Senate candidate Jeff Bell. Noting that Bell will be outspent by incumbent Senator Cory Booker, Christie reminded the crowd that he was outspent three to one when he ran against Jon Corzine in 2009.
Christie said his initial election to the governor's office not only proves that Republicans can win statewide in New Jersey but that they can win even when they are outspent.
Bell is running a self-described guerrilla campaign relying heavily on social media and word-of-mouth and that was amply demonstrated last night as a large group of college conservatives from the Princeton University Republican Club cheered him on. Bell's tactics have worked before. He came from nowhere to win this year's primary battle for the GOP nomination and in 1978 he toppled popular Republican Senator Clifford Case in a primary victory that foreshadowed the Reagan Revolution.
Christie was in an upbeat mood last night as he expressed his unequivocal support for Bell during an event at which both men had very kind words for one another. Bell declared his admiration for Christie, calling him a tell-it-like-it-is conservative. And Christie assured Bell that he will be joined by First Lady Mary Pat Christie and two of the Christie children in voting for Bell. "Four votes, that's a landslide right there," Christie joked.
The governor urged everyone in the room to contact ten friends to help maintain momentum for Bell in what Christie described as a race that is now "a matter of single digits." Indeed, some polls have shown Bell within striking distance of Booker and Booker's favorables have been hard-pressed to crack the all-important 50 percent mark.
Christie told the crowd that he's been in 32 states campaigning for Republicans in his role as Chair of the Republican Governors Association and he's seeing a clear trend toward the GOP. And the governor also used the occasion to take a few swipes at President Obama, suggesting he is weak and too interested in the next election rather than the hard work of governing.
While Christie noted that he has worked closely with Cory Booker and other Democrats on problems facing the state he made a clear separation between that and party politics. Christie said that elections are about choices while governing involves the business of cooperation in the public interest. And Christie reminded the crowd that he should no more be expected to support Booker's re-election than Booker should be expected to support him in his electoral endeavors - something which has not happened.
Christie said he would host another fund raiser for Bell and that he will make campaign appearances with Bell. He added that he expected the numbers of Bell's enthusiastic supporters to grow and expressed his hope that the Bell campaign would be on TV with ads soon so that Bell's message can get out to voters.
Photos copyright 2014 by Dan Cirucci.