One Of Hollywood's Great Stars Passes Away

You may remember her as the mom in the unforgettable Miracle on 34th Street -- a Christmas classic still treasured today.
Or maybe you recall her opposite John Wayne in The Quiet Man.
Maybe you recall her from The Parent Trap or How Green Was My Valley or Rio Grande or her final feature film, Only The Lonely.
With her titian red hair and her peaches-and-cream complexion she was known as "the queen of Technicolor."
Yes, she was Maureen O'Hara, the Irish-born colleen who won the hearts of countless Americans on the big screen. Maureen O'Hara has died quietly in her sleep at the age of 95, her family says.
"It is with a sad heart that we share the news that Maureen O'Hara passed away today in her sleep of natural causes," her family said in a statement.
She died in her Boise, Idaho, home, the family said.
"Maureen was our loving mother, grandmother, great-grandmother and friend. She passed peacefully surrounded by her loving family as they celebrated her life listening to music from her favorite movie, The Quiet Man," the family added.
Born Maureen FitzSimons, on August 17, 1920, in Ranelagh, Ireland. The second oldest of six children, Maureen was raised in a close-knit Irish Catholic family. It's been said that she displayed a penchant for dramatics at an early and in fact staged presentations for her family. In school she was reportedly active in singing and dancing.
While still in her early teens, Maureen enrolled at Dublin's prestigious Abbey Theatre School, where she studied drama and music. After graduation in 1937, she was offered a lead role with the Abbey Players, but instead she decided to try her hand at film acting. That was a solid move as she was clearly onto something.
She then moved to London, where she caught the eye of Oscar-winning star and producer Charles Laughton. He convincing Maureen to change her last name to O'Hara and then helped launch her career by recommending her for the role of the orphaned Mary Yelland in Alfred Hitchcock's British-made film Jamaica Inn (1939). Although the film met with lackluster reviews, O'Hara was noted for her convincing performance.
The rest, as they say is Hollywood history.
Maureen O'Hara became one of the most bankable and beloved stars in tinseltown, a place where she was never truly at home. She treasured (and held onto) her small-town values and her faith.
Farewell to one of the last of the greats from Hollywood's Golden Age - Maureen O'Hara! 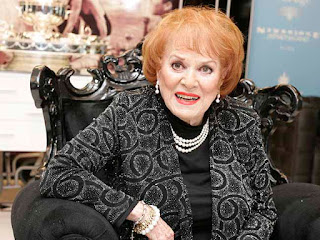