From our friends at Save Jersey:
By Matt Rooney | The Save Jersey Blog
Almost exactly one year ago today, Save Jerseyans, when President Barack Obama usurped Congress’s constitutional authority to set U.S. immigration policy in a manner unprecedented in American history, New Jersey’s Leonard Lancewarned us that the President had “brought us closer to a constitutional confrontation” through his alarmingly poor behavior:

President Obama has stretched his constitutional powers and his actions this evening have brought us closer to a constitutional confrontation.  Rather than work constructively with the new 114th Congress in January to reform our Nation’s broken immigration system, the President is awarding amnesty to millions of unlawful immigrants unilaterally in violation of the exclusive power of Congress to amend statutory law.  In response, my colleagues in both the U.S. House and the Senate will review all of the tools established by the Founders to restrain executive overreach, including the power of the purse and the authority to write legislation.  Litigation may be necessary to reaffirm the essential role of Congress under our system of checks and balances. Congress must not allow the President’s actions to stand unchallenged.”

And the Courts are working through it, as predicted, but the more imminent and potentially dangerous crisis in our midst is one that few foresaw yet one which is nevertheless directly related to the Obama Administration’s imperial, hyper-political and yes, let’s just come right out and say it, shamelessly lawless approach to immigration. 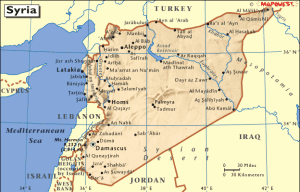 I’m referring to the growing number of governors – 30 as of this morning – who are calling for an end to the Administration’s Syrian refugee resettlement program. Among them is our own GovernorChris Christie who’s directed New Jersey officials to not cooperate with the feds.
Can he do that? Here’s your constitutional question.

In Hines v. Davidowitz, the U.S. Supreme Court explained that “the supremacy of the national power in the general field of foreign affairs, including power over immigration, naturalization and deportation, is made clear by the Constitution.” That’s Congress, not the president or the states, so Barack Obama’s efforts to rewrite U.S. immigration law without the federal legislative branch is unquestionably illegal. However, pursuant to the Refugee Act of 1980, the federal executive branch is given some leeway when it comes to immigrants facing “persecution or a well-founded fear of persecution on account of race, religion, nationality, membership in a particular social group, or political opinion” particularly whenever “unforeseen emergency refugee situation.”

Possibly. The more recent Arizona v. United States went a step further in striking down three of the four provisions of S.B. 1070 (the controversial Arizona immigration law), recognizing “broad discretion exercised by immigration officials” such as when the individuals at issue “may be mired in civil war, complicit in political persecution, or enduring conditions that create a real risk that the alien or his family will be harmed upon return.”

Still, we don’t have a Supreme Court opinion directly on point here, and I’m sure many of you could make a spirited 10th Amendment-based argument for why Arizona v. United States didn’t get it right. Justice Scalia’s own dissent noted “the States’ sovereign interest in protecting their borders” with or without federal approval:

The Government complains that state officials might not heed “federal priorities.” Indeed they might not, particularly if those priorities include willful blindness or deliberate inattention to the presence of removable aliens in Arizona. The State’s whole complaint — the reason this law was passed and this case has arisen — is that the citizens of Arizona believe federal priorities are too lax. The State has the sovereign power to protect its borders more rigorously if it wishes, absent any valid federal prohibition. The Executive’s policy choice of lax federal enforcement does not constitute such a prohibition.”

But my goal here isn’t to debate constitutional law, anymore than it is explain why the entire Syrian refugee mess may very well not be what it seems. I wanted to articulate, in detail, how President Obama’s complete and utter lack of respect for the Constitution on one hand, and his dereliction of duty in protecting Americans on the other, have created the inevitable constitutional conflict predicted by Congressman Lance and many others. 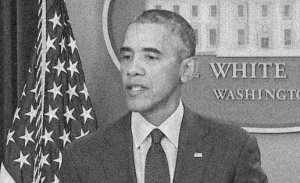 He’s engendered a dangerous vacuum; governors are filling the void as former Governor Brewer and her legislature attempted to do in Arizona when the President laid down as our border was overrun. You can’t credibly claim this current crisis is a product of radical right wing partisanship either with the likes of Maryland’s affable Larry Hoganand New Hampshire’s Democrat (!) Maggie Hassan joining the call to stop the resettlement program. The White House hasn’t even attempted to lead by working with governors to allay their reasonable fears concerning the vetting process post-Paris, fears rooted in White House admissions by the way.

What’s more, why should they blindly trust a radical authoritarian who doesn’t even pretend to care if we think he’s trustworthy?

So before you blame evil Republicans or heartless conservatives for the plight of Syrian refugees, or peddle the goofy “ISIS wants you to hate Muslims” theory that’s typical of individuals who want to apply academic ‘Foggy Bottom’ mindsets to a Bronze Age civilization, check your groundless assumptions and point the finger of blame where it unambiguously belongs:at our feckless, lawless president.
Posted by Dan Cirucci at 4:14 PM