When Someone Reveals Himself In One Sentence 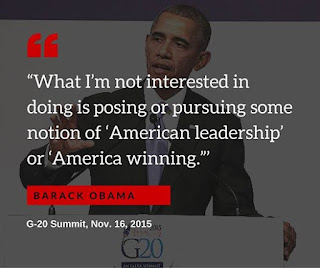 It's clear now: The president has no interest in us winning a war with any enemy -- no interest in us winning anything, for that matter.
And it's not part of his plan for us to lead, either.
No, that's not his plan -- not now, not then, not ever.
He's never been particularly interested in that course of action and he's much better at telling you what he's against rather than what he's actually for.
The truth is, as far as we can tell his only plan is to transform America -- to turn us away from a leadership role in the world and cut us down a few pegs. We now fear he may harbor a deep resentment -- one that does not bode well for America.
Pray. Pray for our nation!
And act as well. Act on behalf of America. Defend it. Champion it. Fight for its leadership role in the world, its ideas and its ideals.