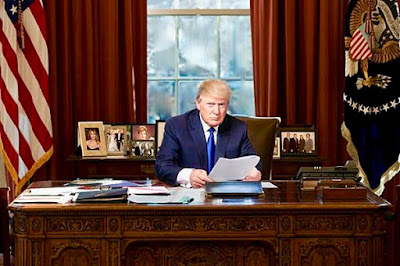 It's becoming increasingly clear now that our liberal friends are simply unwilling to accept the obvious reality that Donald Trump will be the 45th President of the United States, effective 12 noon, January 20, 2017.

At that moment, on that date, what you see above will be the single most overwhelming Fact of Life in these United States.

Now, some of us clearly saw it coming -- even a full year ahead of time. In fact, we even saw the makeup of and the reasons for the mandate. So, yes -- we've got some bragging rights today.

And maybe that's why we can't understand why others are apparently so perplexed or so unwilling to accept the current state of affairs.

This was a change election and change won.
And why some people are so shocked and surprised (not to mentioned downright devastated) is hard to understand. Because, consider the following:

1) In the modern era, it's almost impossible for one party to keep the presidency for three terms in a row. It's happened only once since FDR.

2) America is a democracy, not a monarchy. In recent times, the closest we've come to enshrining a dynasty has been Presidents Bush #41 and #43. The one failed in his first term and the second failed in his second term. Not a good record.

3) People already had Clinton fatigue way back in 2000. They were over the Clintons then. That's how W squeaked into office. There simply was no appetite this time around for bringing the Clintons back again.

Beyond all this, Hillary was simply a bad candidate. Her campaign was little more than a repeat of her failed 2008 campaign where she lost the nomination to Barack Obama because she refused to take risks. Once again, she insisted on playing it safe. She just doesn't know how to run an audacious campaign -- a campaign that takes chances and takes charge.

And there was one other thing -- something quite consequential. Donald Trump finally gave us a Republican candidate attuned to the popular culture and adept at using both it and social media to chart a relevant and dramatic path to victory. In effect, he rewrote the book on presidential campaigns. Chucking the traditional consultant class, ignoring entrenched pollsters and pundits, turning his back on old media strategies that relied on TV ads and the like, he not only appealed directly to his constituency but he grew the constituency by leaps and bounds and created a new American majority -- a majority rooted in the heartland and in both rural and aging bedrock industrial corridors. In the process, Trump awakened a sleeping giant by arousing people who never voted before including huge numbers of male and female high-school graduates. And he did all this while spending far less money than Clinton.

So, it turns out that Donald Trump wasn't joking when he talked about giving voice to the voiceless.  And he meant it when he said this was a movement, not just a campaign. Indeed, he spoke for tens of millions who felt they had no spokesperson, no role, no real stake in the vital interests of the nation. Trump found perhaps the largest and most significant marginalized class of all -- the sort of ordinary, hard-working, faceless Americans who barely get by but are nonetheless indispensable. Problem was, nobody had treated them as valuable or even bothered to recognize them until Trump came along.

Donald Trump ran a largely instinctive campaign. In so doing, he proved that instinct is, in many ways smarter and more effective than logic or careful planning or even discipline. In short, he broke all the rules. But, wasn't it obvious that someone would eventually come along who would dare to not only break the old rules but also write new ones -- someone who would sock it to the know-it-alls?

This is what makes all the anguish of the left so inexplicable. How is it that liberals couldn't figure this out? In Bernie Sanders, they themselves even had a potential nominee who was making this it all-too-obvious for them.

And they still don't want to know it or accept it. They'd rather live in their bubble.

Well, that won't work. And fighting it  the same old way won't work either. Obviously, liberals are gonna battle Donald Trump tooth and nail. No question about that. They've already begun.

But in Trump, they have a new kind of foe -- someone who will not simply roll over and let them have their way, or even half their way. President-elect Trump is a grappler. He's prepared to fight, and fight hard.

Which leads to only one final and all-pervasive question: Will the Republicans stand by him and fight equally as hard? Will they?