Are you looking for non-stop, high-energy entertainment that NEVER quits?
Do you long for supercharged, propulsive live music with great singing and jumpin/jivin stage antics that surprise and delight?
Do you long for music that provides the best of jazz, rock, bebop and classic song-styling in a unique package that immerses iteself in the pure joy of entertainment?
Then you need to see Louis Prima Jr. and The Witnesses and you need to see them ASAP.
We caught Prima Jr's show recently in West Chester and found ourselves cheering on Louis, his easy-on-the-eyes vocalist and his eight-piece band during a nearly two hour performance that started sky high and just kept climbing.
Yes, Prima does many of his father's classic numbers (like Angelina, Bei Mir Bist Du Schon, Jumpin 'n Jivin and Just A Gigilo) but he does them in his own updated style -- a style that pays homage to his daddy but also gives every classic a special newfangled twist. And Prima delivers many newer numbers and even a few country tunes in a mix that will have you laughing, clapping, swaying in your seats, stomping your feet and maybe even dancing. It's one of the liveliest evenings of entertainment we can ever remember.
Every single musician in Prima's band is top notch and each has a moment to shine as the evening's music keeps getting better and better and livelier and livelier. It fact, you're liable to literally gasp at the stellar performances you will witness -- including a jaw-dropping drum solo and a band member who plays two horn instruments at once! And after the show, Louis himself and the whole group will greet you.
Trust us -- this is pure entertainment the likes of which we haven't seen in decades! It's propulsive!
Click here to find out where Louis Prima Jr. and his pals will be performing. 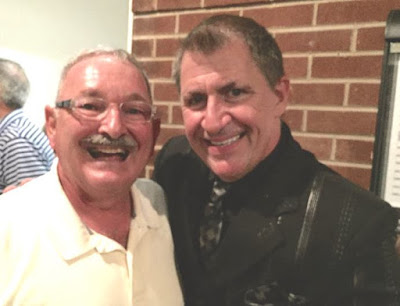 Born in 1965, Louis Prima Jr. is the youngest child and only son of musician and entertainer Louis Prima. His mother Gia Maione began performing with his father in 1962. She taught Louis Jr. to play the drums at 5 years old. He grew up on the outskirts of Las Vegas, on his dad's golf course, Fairway to the Stars, and spent two weeks every summer at his grandparents' house in Toms River, New Jersey. His grandfather, Tom Maione, owned the Red Top Bar at Seaside Heights.
When the Prima family moved to New Orleans, he learned piano. His aunt, Sister Mary Ann, taught piano, and he quickly caught on. The family moved into the home that his father built for his mother on Pretty Acres Golf Course in Covington, Louisiana but soon realized the house might need to be razed due to a termite infestation. The family moved back to Las Vegas.
In school, Prima took band class and told his mother he wanted to play trumpet. He continued playing through high school, and cites his band directors Bruce Cullings and William "Mac" McMosley as major influences in his life. The high school bands were some of the top in the country, winning top honors in every competition. They competed in the Heavy Division of the Chaffey Jazz Festival, and they marched in the Fiesta Bowl and Sun Bowl.
After graduating from high school, Prima started college to enter the business world. He landed a good job, with what he believed a future, and dropped out of college after only one semester. Within a year, he found a band that was renamed Problem Child. Problem Child became popular in the local Vegas scene and at several venues in Hollywood. They opened for numerous acts in every genre, from Winger to Savatage.
In 1995, Problem Child disbanded, and Prima shifted his musical focus to his other love, the music and style of his father. Enlisting the talents of his sister Lena, who had long since quit the music business and established herself as a Las Vegas performer, Prima put together a band in his father's mold. With the aid of his father's keyboard player, Bruce Zarka, he assembled a band of some of the top musicians in Vegas. He left the music world and began a career in food and beverage management. He started a family and performed only casually with friends.
For several years Prima juggled the demands of a full-time job, part-time music career, and raising his children. In 2010 at age 44, he quit his lucrative day job. At a stage of life when some performers are hanging up their instruments in favor of more secure employment, Prima, a divorced father of two, gambled on a full-time career bringing his dad's musical style to new generations. "I may be good at management," he said, "but that's not what I was supposed to be doing."
Shortly after their breakout performance at the New Orleans Jazz and Heritage Festival (aka Jazz Fest) came one of the highlights of his musical odyssey and a proud moment in his life. On July 25, 2010, the year his father would have turned 100, Prima, Spiegel and the Witnesses were present when his father's posthumous star was put on the Hollywood Walk of Fame.
On July 10, 2012 Prima and the Witnesses released their debut album, Return of the Wildest, on Warrior Records/Universal Music Distribution. Touring in support of Return of the Wildest, the band made their national television debut on Access Hollywood Live. Hosts Billy Bush and Kit Hoover had such a good time dancing along with the band that they were asked to return for the hit television show's Christmas special that had guest Henry Winkler jumping out of his seat to join in the mayhem. Their worldwide tour continued through October 2013, highlighted by their performance at the first BottleRock Napa Valley festival. sharing the bill with Macklemore, Black Keys, Zac Brown Band, and Kings of Leon.
Prima's second album, titled Blow, was recorded at Capitol Records in the same studio where his father and mother recorded.
Posted by Dan Cirucci at 9:00 AM