Maybe It's So Outta Control It's Hopeless, Huh?

You have to scratch your head and wonder about ESPN taking an anouncer off its coverage of University of Virginia football games because his name is Robert Lee. Yeah, Robert Lee - an Asian guy!
How crazy is this? How far has the insanity of political correctness, or liberal derangement or whatever you want to call it actually gone?
Well, when it invades the world of sports, it's gone pretty far -- too far, it seems. Let's not forget that this is the same ESPN that gave its Most Courageous Athlete (ESPY) honor to Caitlyn (the former Bruce) Jenner. Indeed, "wacky" would be too kind a word for that move.
But organized sports has been out of control for a long time now. And my theory about all this is simply that sports has become too big, too ubiquitous, too invasive throughout our society to be managed in any sane manner anymore.
In fact, it’s even gotten so bad that there’s nothing very sportsmanlike about sports anymore.
Consider the whole sorry mess: the endless drug-enhancement allegations in baseball; the hundreds
of out-of-wedlock children reportedly fathered by NBA players; the NFL concussion controversy; the more than $200 million racked up each year in NHL game-related injuries, the growing number of pro football players who won't stand for the national anthem and, on the collegiate level, outrages like the Jerry Sandusky horror and their related cover-ups that have sullied the reputations of great universities.
Lest you think this is limited to the pros or big-time college sports, think again. Even among kids’ sports, the win-at-any-cost mentality seems so elevated and tensions are so high that national youth sports associations now monitor weekly reports about fights or abusive conduct involving parents or coaches. 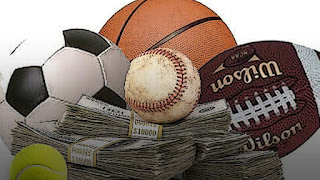 And it all spills over to the children. A child who thinks it’s OK to scream at an umpire or hurl abusive language at opposing team members may carry that behavior to school and yell at a teacher, take on other authority figures or bully other students. In fact, scholarly journals have even suggested a link between youth sports participation and combative behavior off the field.
But none of this seems to matter to the gluttonous sportsocracy and those who feed it.
This behemoth of teams, players, coaches, agents, media commentators, advertisers and product-placers gets richer by the minute. And if, in the process, they’re corrupting the popular culture and/or destroying the joy of the game, they couldn’t care less. Because for them, the bottom line is just that — the bottom line.
And despite the fact that sports has now been politicized (along with much of the rest of our society) rabid sports fans are fattening the bottom line with an almost gleeful abandon even though the average ticket price for an NFL game routinely exceeds $100, if you can find a ticket.
Through endless TV sports channels, radio jock talk programs and burgeoning sports-related social media, the craving for a sports fix is fed 24/7.
Regardless of the implications, for far too many, sports seems to have become America’s drug of choice.
It's enough to make you want to land with King Kong style ferocity right smack in the middle of the 50 yard line and roar: "It's ONLY a game!"
Posted by Dan Cirucci at 8:54 PM