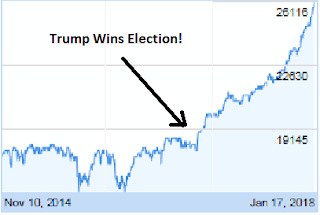 Until Donald Trump won the 2016 election, America was stagnant.
We were just sort of plodding along.
Some days were better than others, but mostly we were just stuck in the mud. We were mired in a "low expectations" swamp. We were told that we had to get used to this; that America's glory days were over; that the "GoGo" years had passed us by; that America could no longer expect robust growth; that we would no longer lead the world.
But none of that was true. None of it!
In fact, it was no truer than "If you like your doctor, you can keep your doctor; if you like your insurance plan, you can keep your plan."
And here's the chart that proves it all.
Just look at what has happened: Stocks setting records every day; the lowest unemployment rate in 45 years; the lowest black unemployment rate EVER; companies building, expanding, hiring IN AMERICA; taxes cut across-the-board; corporations upping salaries and giving their employees bonuses.
And all this in just 12 quick months.
It's truly breathtaking, America. And it's unprecedented.
And remember: This is just the beginning!
Avanti!