THIS Says It Better Than We Could! 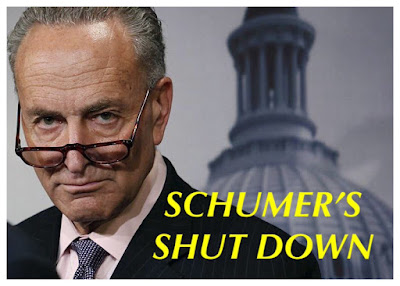 From our friends at the Save Jersey blog
By Matt Rooney (reprinted with permission):
Misinformation abounds out there, Save Jerseyans.
Let’s keep it simple:
(1) Yes, it’s a Democrat shutdown.
Time out for a quick civics lesson: Republicans may “control” the White House and both chambers of Congress by numerical majorities, but the U.S. Senate majority is slim (only 51 seats) and therefore, under Senate rules, it’s hard to get a lot of big things accomplished (and even a lot of small things). What the media isn’t telling you? And a general public whose civic knowledge is nearly non-existent? The GOP majority can’t pass any spending bills because of a 60-vote filibuster rule. Without 60 votes? Charles Schumer, the Democrats’ minority leader from New York, can rule the roost for days or even weeks.
There’s nothing Trump or Majority Leader Mitch McConnell can do about it unless McConnell changes the rules.
(2) And the Democrats’ rationale for this shutdown is obnoxious.
So that’s the civics/mechanics of the shutdown. I can sum of the politics of what’s happening in two lines of text:
Republicans: Let’s do our jobs and fund health care (CHIP) for U.S. citizen children.
Democrats: Let’s shut down the government over non-citizen children for Election 2018.
That’s the drama playing out right now on Capitol Hill. In a nutshell.
Democrats are trying to gin up their base in blue states (like New Jersey), and raise money from their donors over DACA and the President’s alleged “shithole” gaffe. It’s that simple. So now DACA is being tied to a completely distinct, unrelated budget fight. Between this ridiculousness and Cory Booker’s #tearsofrage performance earlier this week, how is anyone NOT embarrassed to be a Democrat?!?! Right?
[A quick aside: there are Republicans who CORRECTLY criticize the GOP leadership for living by continuing funding resolutions as opposed to passing long-term budgets. Totally valid. But when the Democrats attempt to hijack the budget process for partisan campaign purposes? There’s no moral equivalency.]
(3) By the way, who cares?
Government shutdowns are always nice opportunities to look outside, note the lack of burning buildings and raining frogs, and appreciate how (most) of what our government does “for us” is completely wasteful and unnecessary. Unless you’re trying to rush order a passport? There’s very little chance most Americans will even notice that the federal government is partially shuttered. Social Security checks WILL still go out. The U.S. military is STILL on duty. The Post Office is OPEN. Your local roads/utilities/garbage collection have nothing to do with the feds. Carry on, folks. The feds are even reportedly trying to keep most national parks open this time around!
Why Republicans are too stupid/lazy/cowardly to point any of this out is, as ever, one of the many reasons “why we lose.”
Posted by Dan Cirucci at 4:55 PM