Sondheim At 90: An Enduring Gift To Humanity! 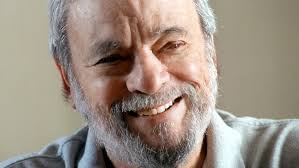 Today we will be concentrating mostly on the 90th birthday of Stephen Sondheim, the celebrated Broadway composer who has given us everything from West Side Story to his most recent production, Road Show which we saw as part of the City Center Encores series in New York not too long ago.
Between those two shows we've had a galaxy of stellar Broadway productions including (among those we've seen and enjoyed) Follies,  Sweeney Todd,  Company,  Sunday In The Park With George, Merrily We Roll Along, Pacific Overtures, Assassins, A  Little Night Music and Into The Woods.
The sheer output of this musical genius is staggering and gives us a picture of a true American Original.
When we think of Sondheim we think of the bittersweet nostalgia of Follies, the social commentary of Company, the historical daring of Pacific Overtures, the psychological pull of Into The Woods, the sheer terror of Sweeney Todd, the irresistible froth of A Little Night Music, the chilling reality of Assassins, the inventiveness of Merrily We Roll Along and the inventive dazzle of Sunday In The Park With George.
These shows not only span decades but they run through the full range of human emotions and the scope of the American experience from the tedium of married life to the polarization of competing communities to the torment of the criminal mind, to the role of artists in our society to our deepest fears, most haunting regrets and most enduring hopes.
And, make no mistake about it, the shows speak of love -- love in all of its manifestations and with all of its ongoing consequences. In Sondheim shows you will find unrequited love, parental and fraternal love, imagined love, longed for love, unconditional love, twisted love, remembered love and unabashedly romantic love.
One of the things we take from Sondheim is a boundless work ethic. His production level is nothing less than staggering and is a testament to hard work. Sondheim's success belies the notion that artists have some kind of magic wand that creates their art. He'd be the first to tell you that productive creativity is a lonely business -- a solitary world of daily toil.
The joy comes from the work itself. It's the process -- the journey, not the destination -- that brings fulfillment. And then, the knowledge that you've created something where there was once nothing. Still, we remain observers and always part of a larger whole that we can only begin to imagine.
From Sondheim himself, first via Pacific Overtures and then Sunday In he Park With George:

It's the fragment, not the day
It's the pebble, not the stream
It's the ripple, not the sea
That is happening
Not the building but the beam
Not the garden but the stone
Only cups of tea
And history
And someone in a tree