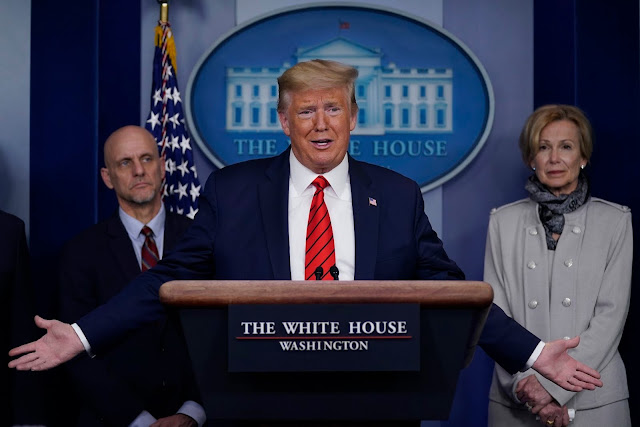 When I think of how President Trump's daily COVID19 briefings, two words come to mind: tough love.
Tough love is described as the kind of love that expects you to take responsibility for your own actions. It's also love expressed in an unsentimental manner which challenges you to give your all.
The lyrics of the song Tough Love by Avicii say "give me tough love and a lesson to learn."
The  President is hoping that the vast federal bureaucracy, our elected leaders and each of us individually will learn important lessons from this crisis -- lessons that will hold us in good steed going forward; lessons that will help us deal with future crises and prevent another one of this monumental scale.
It's important to note that you can practice tough love and cheerlead at the same time. And the President has started every one of his daily briefings with positive news, gratefulness and encouragement for the whole country. His remarks are peppered with superlatives and visions of a better day.
As a hugely successful salesman, Trump is very good and honing in on a message and hammering away at it again and again. Let's look at some of the words and phrases he's been using:

No one has ever seen anything like this before.
The President uses this phrase to express both the magnitude of the problem and the persistent, menacing nature of the virus itself. It's his way of reminding the county that we are in uncharted waters and that reality always looks more obvious in hindsight than in foresight.

We're learning so much.
This is Trump's way of saying that we're not only making progress every minute of every day but what we're learning now is neither fleeting  nor transitory. It's an investment in our path forward, both tomorrow and years from now.

These are incredible people.
The President uses this phrase repeatedly in reference to  the members of his task force, first  responders, medical professionals, law enforcement, scientists, business leaders and ordinary Americans  who are pitching in to make a difference. It's his way of thanking them and publicly acknowledging their efforts.

We'll get through this.
These four words (that cannot be said enough) have become a sort of mantra and, in TrumpSpeak are almost always followed by "and we'll be back, bigger and better than ever." In Donald Trump's world a setback  is merely a setup for a comeback. But the comeback must always be way bigger and more spectacular than what preceded it.

I'm very proud to be  your President.
Embracing the paternal role of the Chief Executive, the President is telling the country that he understands how tough this is and he appreciates the good job we're doing every day. It's what he calls "very special" and the pride that he says he feels is as close to sentimentality as he's likely to get.

President Trump speaks in simple and direct terms --  the sort of everyday language that ordinary Americans can relate to.  He wasn't necessarily elected to comfort or soothe. He was elected to shake things up and make America great again. He'd be the first to remind you that pre coronavirus, he already accomplished much of that.  Now, he's gotta do it all over again.  If anyone can pull off such a Herculean feat, Trump can.