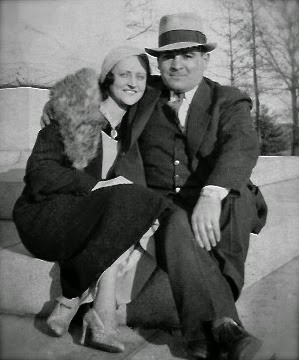 The best dads give you a great sense of security. They're real. They're solid. There's no evasiveness and no pretense. Their love is quiet and constant, enduring and bankable.

In a myriad of ways my dad prepared me for the day when he would no longer be at my side. He did that by example. I've already enunciated the important things that I learned from him -- lessons that make me who I am today. These included the endless admonishments to "put a smile on your face" and "be nice to everyone because you never know who you're gonna need in this world" as well as "drop the subject" which was always his plea whenever I spent too much time rehashing something that was over and done with.

Of course, my dad was a matched pair with my irrepressible mother (both shown above in a photo from the 1930s). Their 55-year marriage was a testament to that.

Yet, dad was always his own man. He could not be cowered, nor was he easily deceived. And if you pushed him too far, he was likely to respond in kind. Though he could be combustible, my mom (and all of the rest of us) liked him that way. We respected him for it because we knew that he was a passionate man who was comfortable with his own feelings. So, his feelings were right out front. And yes, he taught me that's it's OK for grown men to cry now and then as well.

God willing, that reserve of strength, that unyielding love will carry me into the years ahead and the moment when I will be reunited with him. For now, his loving spirit sustains me every single day as his walks right beside me.
Posted by Dan Cirucci at 9:15 AM