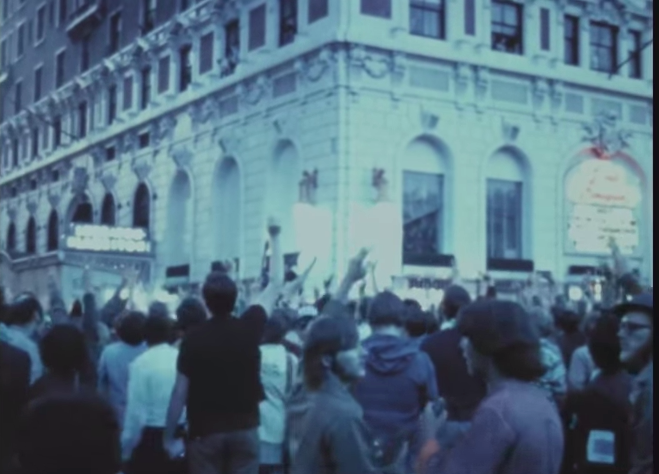 A lot of people are looking at what’s happening so far this year and comparing it to 1968. But many of these same people weren’t even alive then.

1968 was a tumultuous yearn our nation’s history. It was a year of tremendous upheaval, gut-wrenching tragedy, tortuous polarization and graphic, bloody, mass violence.

–In know because I was there. I was part of it. And I saw much of it close up. Like now, race was a big part of the divide which overtook our nation. But war — specifically the Vietnam war — was the major factor. This prompted an immense under-30 population (the Baby Boomers) to assert itself and become estranged from the rest of the country.
In 1968, the media called it a “children’s crusade.” But those of us who participated were hardly children, even though many of us were novices to the pugnacious world of national politics. We were mostly college kids watching our contemporaries die by the thousands in a senseless war halfway around the world. And the lies and injustices of Vietnam animated the inequities that we felt we saw at home as well. It was all very graphic because it was televised into our living rooms every night. But it was more than that.
I lost four of my high school classmates in Vietnam. Multiply that figure out across the nation and over the decade-long war and you have more than 58,000 fatalities.
In the spring of 1968, we were in the throes of it. And I was a senior at Villanova University. I knew that I could not simply stand aside and watch the carnage continue. So, as a political science major, I decided to try to work within the system to bring about change.I joined the campaign of the Democratic peace candidate, Sen. Gene McCarthy. The cerebral senator was the only Democrat who dared to challenge President Lyndon Johnson early on. Few people gave him any chance of dethroning an incumbent president. But that didn’t matter to me when I joined some of my classmates and went to work for McCarthy in New Hampshire, where he unexpectedly captured such a huge portion of the primary vote that he sent shock waves through the party establishment. By the end of March, Johnson bailed and announced he would not seek re-election.
Yes, there were radicals in our midst then, just as there are today. Where Antifa, BLM and similar groups wreck havoc today, in 1968 there was the Weather Underground, the Black Panthers and the Yippies, among others. Though I was not part of them, these groups were the radical (and often violent) vanguard of the movement. They shouted obscenities, torched the flag; burned their draft cards; threw rocks and bottles and even set off explosives.
For my part, I followed McCarthy through other primary states (New York, Indiana, Pennsylvania) and on to the infamous Democratic National Convention in Chicago. I also marched for peace, justice and civil rights in several mass marches, including in Washington, DC.
By that summer, the nation witnessed horrific events. The Rev. Martin Luther King Jr. was assassinated in April and Senator Robert F. Kennedy (who had entered the presidential race and may have been headed toward the nomination) was gunned down in June.
In August, the party convention was a veritable bloodbath. Those of us who were part of the “McCarthy kids” were called off the streets of Chicago by the candidate himself. He spoke to us calmly and responsibly and allowed us to camp out at his headquarters in the vast Conrad Hilton Hotel. From a lobby mezzanine above the street, we watched it all play out — the confrontations with the police, the tear gas, the beatings, the bloodshed. We chanted again and again: “The whole world’s watching!”And the world was watching and reacting. Inside the convention hall, the scene was equally ugly and the Democrat Party was literally torn apart.
Of course, there were no 24-hour news networks and no cellphones, Facebook, Twitter, Instagram, email or GoFundMe. We had to advance our cause by knocking on doors, dialing rotary phones, licking envelopes, operating mimeograph machines and collecting donations on street corners. The closest we got to any demographic analysis of our movement was a mailing list.
Activists came and went, grouped and regrouped, lost track of one another and then maybe reconnected at another time and place.
Our greatest accomplishment was ending the LBJ era. That alone was unprecedented. After Johnson announced that he would not seek re-election we marched through the streets singing “ding, dong, the witch is dead!” And even though our candidate didn’t prevail in the end, we felt that we had fought the good fight and remained true to our principles.
But how much difference did all that really make?
We made a lot of noise and expended a lot of youthful energy, true. But in the end, Richard Nixon preached the gospel of “law and order,” mobilized the “great silent majority” of Americans and became President of the United States.
The entrenched forces in both political parties mostly prevailed. The Washington establishment (now known as “the deep state”) remained intact. The Vietnam war continued. Poverty and inequality persisted. The government grew larger. And Nixon, scheming and paranoid as ever, bungled his way into Watergate.
Of course, all of this set the stage for Ronald Reagan. But that was still more than a decade away.
Even though today’s activists are much more technologically advanced and sophisticated, the establishment is betting that few of those who are part of the current movement will buckle down and remain in the fight for the long haul. Many are simply too impatient. Others become battle weary.
The lesson for all of them would seem to be clear: Be careful what you wish for!
A postscript: For my own part, I’ve still got the scars from my early involvement. But that’s OK, because I learned from it all. It strengthened and toughened me. And I’m one of those who has stayed involved.
My politics changed over the years. I embraced new causes and new heroes. But I’ve never walked away from the arena, lest I forfeit the most coveted title of all: engaged citizen.
This essay originally appeared in Save Jersey.
Posted by Dan Cirucci at 9:04 PM