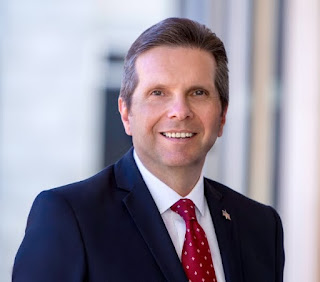 New Jersey State Assemblyman Gerry Scharfenberger (R-Monmouth) takes aim as to what has become a modern day purge with the destruction of monuments, memorials, and even namesakes across the nation as well as here in New Jersey. Often committed by individuals with limited knowledge of history, those same few fail to acknowledge the importance of recognizing and learning from the past – even its mistakes:
“The destruction of public monuments is one of the most ludicrous actions we have witnessed in our lifetimes - accomplishing nothing more than a chaotic disrespect and inability to understand history,” says Scharfenberger.
“Not only does it show an incredible ignorance of the past, but also a disregard for our system of laws which some elected officials encourage by sitting idly-by.”
Assemblyman Scharfenberger has challenged actions like this before having questioned his fellow legislators’ attempt to remove Major General Phillip Kearny’s statute from the U.S. Capitol’s National Statuary Hall in Washington, D.C. earlier this year. Yet, this recent uprising has been fueled by emotion and appeasement rather than an open, critical discussion:
“If we fall into the trap of removing monuments because we impose today's worldview on historical figures, then where does it end,” questioned Scharfenberger. “It will end with the vast majority, if not all, monuments being torn down because the truth of the matter is, there are stark differences between the past and today.
However, the point of understanding history is so we learn from it and forge a better world in our future.” Assemblyman Scharfenberger, who is an archaeologist by trade, understands the immense importance of not only preserving history, but the need to differentiate between the value in these monuments and the acceptable norms of present day society:
“One of the most honorable men in our nation’s history, who was the backbone of the Civil Rights Movement, was opposed to gay marriage during that same time,” Scharfenberger continued. “Will his statue be next? It most definitely should not be, yet some may think otherwise and that is the root problem – that a few are dictating a selective history of our past, present, and future.”
While the past is troublesome, at times, to understand and the lives of even some of the most exalted historical figures are complicated, current elected officials should be acting as stewards of preservation rather than spectators to historical destruction:
“History is not always pretty - there have been very good episodes, very bad and a lot of in between. Together, they show us what we have done to address injustices, progress as a people, and how to avoid the pitfalls of the past as we go forward,” emphasized Scharfenberger. “It's time for elected officials to stand up for our history and prosecute those who engage in lawless destruction of public property.”
​“It's critical for us to embrace our history and learn from it, not destroy it.
Otherwise, we doom ourselves to eventually repeating it.”
Posted by Dan Cirucci at 11:21 AM