The Truth Behind The Campaign Against Columbus

Why are activist groups coming after Christopher Columbus? It is in part due to the widespread book peddled by a radical, left-wing historian. His narrative of American history is filled with half-truths and distortions. Columbus deserves better.
It's time to know the truth about Columbus:
Much of the following is from Columbus, Fact Or Fiction? a scholarly study commissioned by the OSIA Commission of Social Justice: 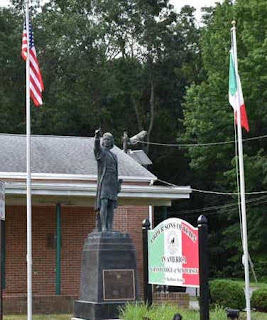 Most of the native tribes Columbus found [when he arrived in the Americas]were hunter-gatherers who engaged in bloody tribal wars and, in the case of the Arawaks, Caribs and Canibs, slavery, torture and cannibalism. To survive, the native populations depended on “slash-and-burn” cultivation of the land along with hunting, fishing and collecting edible wild plants, seeds and shellfish. They had no written language, history or literature. In their struggle for survival, these peoples were not the champions of the environment that they are often portrayed as today. . . .

Columbus never owned any slaves or brought any to the Western Hemisphere from Africa.

During his first voyage in 1492, Columbus landed on the island of Hispaniola (now Haiti and the Dominican Republic). There, with the help of a tribe of friendly Taino Indians, he built a fort called Navidad and left 40 of his crew there when he returned to Spain in January 1493. On his return to Hispaniola in November 1493, he learned that all his men had been massacred by another Taino tribe. . . .

No evidence indicates that Columbus thought the islanders he met were racially inferior in any way. In fact, in the journal of his first voyage, Columbus describes the Tainos and other tribes as “well-made with fine shapes and faces...their eyes were large and very beautiful...straight-limbed without exception and handsomely shaped....” He praises their generosity, innocence and intelligence, saying they could “readily become Christians as they have a good understanding.” Initially, Columbus had friendly relations with the five Taino tribes he met during his first voyage. These relations soured with four of the five tribes after he found the colony of men he had left behind in the fort Navidad had been slaughtered. He became good friends, however, with one tribe of Tainos led by Chief Guacanagari, who helped Columbus build his fort and fought alongside Columbus against the Taino tribes that wanted to kill the Europeans. Guacanagari paid heavily for his friendship with Columbus. His village was burned; he was wounded in battle and fled to the mountains where he died. . . .

Columbus made four voyages to the Caribbean in a twelve-year period (1492-1504), spending from only seven months to two years and nine months (including the year he was shipwrecked on his fourth voyage.) It is inconceivable that he could have killed millions of people in so short a time. Responsibility for the deaths of many thousands of natives can justly be attributed to the Spanish conquistadors and other Europeans who followed Columbus here. But even in this case, since there were more natives than Europeans, the loss of millions of lives could not have been caused by the Spaniards’ warfare and forced labor alone. 4 In fact, most of the native populations perished because they lacked immunity to such diseases as small pox, typhoid and diphtheria as well as the non-fatal childhood diseases of measles and mumps that they caught from the Spanish explorers. These diseases were not transmitted deliberately and cannot be considered a tool of genocide. Scholars estimate that 80% of those who died were infected without ever seeing a white man. . . .

We strongly urge you to read the full report about Columbus, the history of his voyages, the native peoples and the opening of the new world. It's a real eye-opener!
Once you read it, you will begin to understand how Columbus' story and legacy has been grossly distorted by zealots who are at war with western civilization and America.