From Justice Alito, A Stern And Dire Warning! 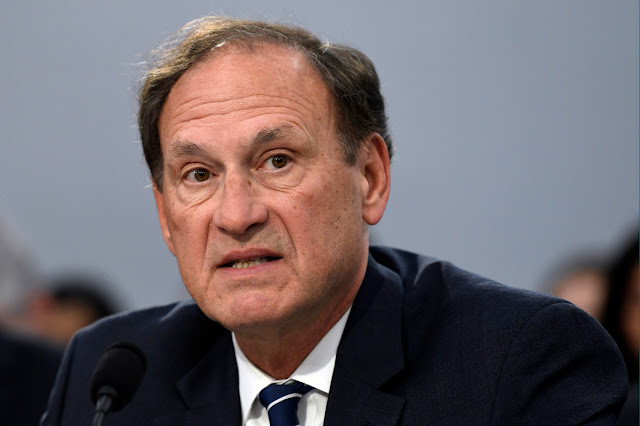 Big liberal media are already characterizing and pretty much telling you what to think about it. We've already posted a video of the speech and are linking to the full text here. But we're also happy to present  excerpts of the speech which addressed the loss of individual liberties, particularly First Amendment rights and religious freedom. From Justice Alito:

Unfortunately, tolerance for opposing views is now in short supply in many law schools, and in the broader academic community. When I speak with recent law school graduates, what I hear over and over is that they face harassment and retaliation if they say anything that departs from the law school orthodoxy. . . .

The pandemic has resulted in previously unimaginable restrictions on individual liberty. . . .  I'm a judge, not a policymaker. All that i'm saying is this. And I think it is an indisputable statement of fact, we have never before seen restrictions as severe, extensive and prolonged as those experienced, for most of 2020. . . .

Who could have imagined that the COVID crisis has served as a sort of constitutional stress test. And in doing so it has highlighted disturbing trends that were already present before the virus struck. . . .

The vision of early 20th century progressives and the new dealers of the 1930s was the policymaking would shift from narrow minded elected legislators, to an elite group of appointed experts in a word, the policymaking would become more scientific. That dream has been realized to a large extent. Every year administrative agencies acting under broad delegations of authority churn out huge volumes of regulations that dwarfs the statutes enacted by the people's elected representatives. And what have we seen in the pandemic sweeping restrictions imposed for the most part, under statutes that confer enormous executive discretion. . . .

. . . whatever one may think about the COVID restrictions, we surely don't want them to become a recurring feature after the pandemic has passed. All sorts of things can be called an emergency or disaster of major proportions. Simply slapping on that label cannot provide the ground for abrogating our most fundamental rights. And whenever fundamental rights are restricted, the Supreme Court and other courts cannot close their eyes. . . .

Just as the COVID restrictions have highlighted the movement toward rule by experts, litigation about those restrictions, has pointed up emerging trends in the assessment of individual rights. This is especially evident with respect to religious liberty. It pains me to say this, but in certain quarters, religious liberty is fast becoming a disfavored, right. And that marks a surprising turn of events. Consider where things stood in the 1990s. And to me, at least that does not seem like the Jurassic age. When a Supreme Court decision called employment division versus Smith, cut back sharply on the protection provided by the Free Exercise Clause of the First Amendment. Congress was quick to respond. It passed the Religious Freedom Restoration Act (RFRA). To ensure broad protection for religious liberty. The law had almost universal support. In the house, the vote was unanimous. In the Senate, it was merely 97 to three, and the bill was enthusiastically signed by President Clinton today that widespread support has vanished. When states have considered or gone ahead and adopted their own versions of reference. They have been threatened with punishing economic boycotts. . . .

The question we face is whether our society will be inclusive enough to tolerate people with unpopular religious. . . .

Over the summer, the Supreme Court received two applications to stay COVID restrictions that blatantly discriminated against houses of worship, one from California, one from Nevada.

In both cases, the court allowed the discrimination to stand. The only justification given was that we should defer to the judgment of the governors because they have the responsibility to safeguard the public health. . . .

So if you go to Nevada, you can gamble, drink and attend all sorts of shows. But here's what you can't do. If you want to worship and you're the 51st person in line, sorry, you are out of luck. houses of worship are limited to 50 attendees. The size of the building doesn't matter. Nor does it matter if you wear a mask and keep more than six feet away from everybody else. And it doesn't matter if the building is carefully sanitized before and after a service. . . .

Nevada was unable to provide any plausible justification for treating casinos more favorably than houses of worship. But the court nevertheless deferred to the governor's judgment, which just so happened to favor the state's biggest industry and the many voters it employs. . . .

The rights of the free exercise of religion is not the only ones cherished freedom that is falling in the estimation of some segments of the population. Support for freedom of speech is also in danger. And COVID rules have restricted speech in unprecedented ways. . . .

Even before the pandemic, there was growing hostility to the expression of unfashionable views. . . .

You can't say that marriage is the union between one man and one woman. Until very recently, that's what the vast majority of Americans thought. Now it's considered bigotry.

That this would happen after our decision in Obergefell should not have come as a surprise. Yes, the opinion of the court included words meant to calm the fears of those who cling to traditional views on marriage. But I could say, and so did the other justices in dissent, where that decision would lead . . .  I assume that those who cling to old beliefs will be able able to whisper their thoughts in the recesses of their homes. But if they repeat those of us in public, they will risk being labeled as bigots, and treated as such by governments, employers, and schools. That is just what is coming to pass. One of the great challenges for the Supreme Court going forward will be to protect freedom of speech. Although that freedom is falling out of favor in some circles, we need to do whatever we can to prevent it from becoming a second tier constitutional right. . . .

Let's go back to some basics. The Supreme Court was created by the Constitution, not by Congress. under the Constitution, we exercise the judicial power of the United States. Congress has no right to interfere with that work any more than we have the right to legislate. Our obligation is to decide cases based on the law period. And it is therefore wrong for anybody, including members of Congress to try to influence our decisions by anything other than legal argumentation. . . .

. . . the covid crisis has highlighted constitutional fault lines. And I've criticized some of what the Supreme Court has done, but I don't want to leave you with a distorted picture. During my 15 years on the court, a lot of good work has been done to protect freedom of speech, religious liberty, and the structure of government created by the Constitution.

All of this is important. But in the end, there is only so much that the judiciary can do to preserve our Constitution, and the Liberty it was adopted to protect. As Learned Hand famously wrote, Liberty lies in the hearts of men and women when it dies there. No constitution, no law, no court can do much to help it. For all Americans, standing up for our constitution and our freedom is work that lies ahead. It will not be easy work. But when we meet next year, I hope we will be able to say that progress was made.