My [One] Close Encounter With Joe Biden 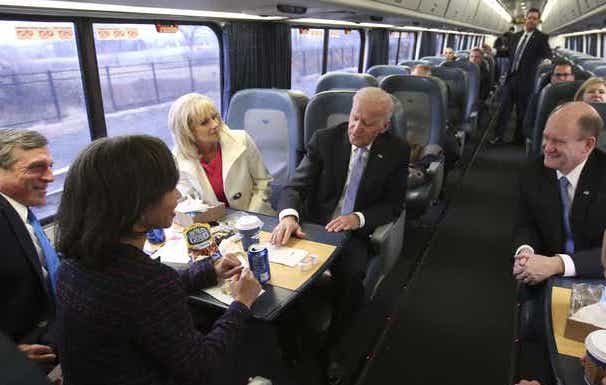 Joe Biden has been around sooo long that almost everyone has a Biden story to tell.

An inasmuch as I worked for decades for the Philadelphia Bar Association and Biden ceaselessly billed himself "Pennsylvania's third US Senator," you might think that I had numerous encounters with Biden. After all, Delaware is but a stone's throw across the border from Philadelphia. But that wasn't the case. Biden was all too familiar for the vaulted Philadelphia Bar Association. Consequently, we never invited him to be a guest speaker at any of our signature events or granted him any honors or sought him out for special attention.

But we did lobby him when we needed to. And as many know, it was not uncommon to encounter Biden on one of Amtrak's metroliners while traveling to and from the nation's capital. That's what happened to me in 1990 when I sat alongside a hugely successful Very Powerful Philadelphia Lawyer (who we'll call VPPL) as we returned home from a trip to Washington where we lobbied legislators regarding a pressing law-related issue -- so pressing that I can't remember what it was.

Anyway, Biden came strolling through our train car. Now, I was traveling with a VPPL who was known for his sartorial savvy. This guy wore embroidered, custom-made dress shirts and silk ties from Hermes. But Biden looked every bit the dapper pol. There he was in a perfectly pin-stripped tailored suit, snugly knotted striped tie and crisp cuff-linked French cuffs that made it appear as if his day's work left him and his attire no worse for wear. Not exactly the "regular Joe" who often referred to himself as "the poorest man in the Senate."

The one giveaway, however, was the hair. He had obviously had implants and you had to wonder if he would have been wiser to opt for a high-end toupee. After all, I thought,  it worked for Sinatra, right?

Well, Biden was the jovial handshaker nonetheless. And as soon as he saw the VPPL who sat on my left in the window seat, Biden beamed. Now, Biden was towering over me, chatting with my seat partner and as he leaned in, the situation became more and more awkward. Yes, we had been brusquely introduced but it was clear that I was simply in the way. So, seeing that the seat across the aisle was available, I maneuvered myself out of Biden's way and into the nearby seat while he jumped in next to the VPPL. And then he really got started.

Biden struck me as the worst kind of schmoozer -- one that you literally can't get rid of. He talked and talked and talked. He flattered the VPPL. He peppered him with anecdotes. He feigned familiarity. And he endlessly dropped names as part of a show of the trappings of power. His lingo was salty at times but don't ask me exactly what Biden said. This much I do remember: the man is a master of small talk. He's the kind of person you could chat with and (if you didn't know better) it could leave you feeling good or even chummy --  until you tried to figure out exactly why. What did he actually say? Not much!

Anyway, the "conversation" finally came to an end and I was able to return to my seat.

"What was that all about?" I asked the VPPL.

"Money?" I inquired. "Was it about a case or something?"

"No," the VPPL chuckled. "He wants money for his campaign. He wants contributions. So now I'll probably have to send him a check. Nothing new."

"What difference does it make," the VPPL said. "He's always running. He's always raising money. That's what he does on the train, going from car to car, making the rounds. He's working the aisles."

This obviously had nothing to do with principles or ideology or even Democrat or Republican or whatever. It was just all about money and influence.

So, this is how I remember Joe Biden -- a slick, slippery schmoozer who can smell the Big Bucks a mile away; a man who never stopped padding his war chest in his relentless quest for what, exactly? Power? Prestige? Preeminence? Or maybe even The Big Enchilada itself! UhHuh!