The Presidency: A Dangerous And Tenuous Place! 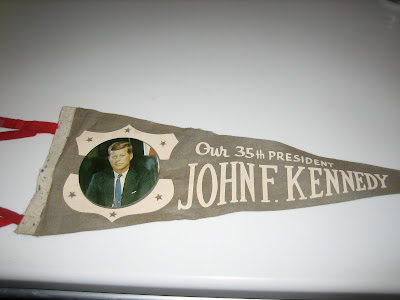 Today marks the 57th anniversary of the assassination of President John F. Kennedy. It was a VERY dark day in American history, Friday November 22, 1963
While doing a bit of spring cleaning, we found this pennant from the 1961 Inauguration of JFK.
It's a bit faded What appears as a blue/gray was actually deep blue but it is an authentic original. Look at those red felt streamers on the end. They've mostly kept their color.
We checked with an appraiser and found that it is worth about $12.
That seems to be what it will garner on the open market.
Obviously, we have no intention of selling it.
It takes up very little room and we continue to treasure it.
BTW: This day always reminds us of the tenuousness of the presidency and the unpredictability of it all.
Think about this for a moment.Over the past 70 years, only five presidencies have been fortunate enough to hold the White House for two full consecutive terms, or eight years.Only five: Eisenhower, Reagan, Clinton, George W. Bush and Obama.Truman served the remaining term of FDR and then one-term of his own (via a miraculous upset win) before declining to seek a second full term at a time when his poll numbers were very low.JFK's first term was cut short at the hands of hate and violence -- an assassination with unanswered questions and an event that plunged America into decades of upheaval.Johnson was forced out of office by massive protests over the Vietnam war. He declined to seek a second full term.Nixon, on the brink of impeachment, was forced to resign.Ford finished Nixon's term but could not even get elected to a single full term himself.Carter completed one term and then was soundly rejected by the voters.George H. W. Bush suffered pretty much the exact same fate.And, while Clinton did serve two full terms he became the first elected president ever to be impeached -- a stain on his presidency that will never go away.Take away the three years of JFK because his presidency ended in an horrific act of fate and we will never know whether he would have achieved a second full term. That leaves 67 years of presidencies, 27 of which ended without achieving the maximum two full terms. That's roughly 40 percent!
And we're not even counting the latest series of events which were triggered by the November 3rd election.America has been through a tremendous amount of instability -- especially from the mid 1960s onward.The Kennedy assassination sent shock waves through our system. The Vietnam war tore us apart and left us scorned and dishonored. The Watergate scandal and subsequent events racked our faith in government. The failed presidencies of Ford, Carter (those were back-to-back) and George H. W. Bush further eroded confidence at critical moments in our history. The Clinton scandals and eventual impeachment cheapened the White House amidst a tawdry atmosphere that hastened the coarsening of the culture. And one can certainly not count the Obama years as a time that brought us together as Obama was barely able to crack 50 percent of the vote in 2008 and 2012 and his party lost thousands of elected offices during his time as president. Plus, those eight years were followed by a veritable electoral revolution and one of the most sweeping upsets in history.You'd think we'd want a bit of time to catch our breaths, wouldn't you?
But it appears we're facing upheaval once again. We suspect it's the sort of thing that must delight our enemies.
Posted by Dan Cirucci at 5:47 PM