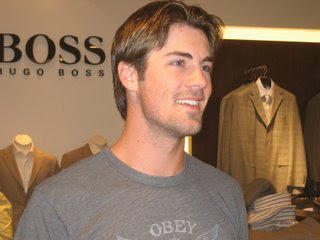 We don't know the first thing about sports (least of all baseball) but, here's what we wrote about Philies pitcher Cole Hamels after meeting him way back in April at the beginning of the baseball season:
He is one of the most articulate, polished, and gracious athletes we've ever met. This San Diego native is not just The Pitcher From Central Casting, he's also an appealing ambassador for his team and for major league baseball. We watched him interact with some of the youngsters who came out to see him and he was attentively kind and natural.
Last night Cole was unflappably confident and chillingly effective as he led the Phillies to their first National League Championship in 15 years. Incredibly, Cole has now marked three wins and no losses in the playoffs, an accomplishment we haven't seen since Curt Schlilling pitched.
And Cole was his usual gracious self after the game, spreading credit around to the entire team.
Does Philly really deserve such a classy guy? Who cares!?
Cool, Cole -- Cool!
Posted by Dan Cirucci at 11:56 AM