Why Did Bush & Bush Give Obama This Photo-Op? 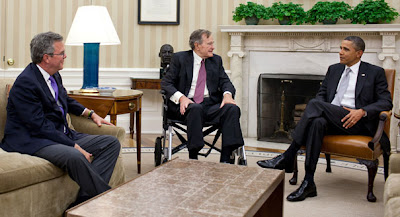 First. former Florida Governor Jeb Bush pulled away from making any endorsement in his state's GOP primary. In the all-important Romney/Gingrich battle he decided to remain neutral.
Then, he and his dad President George H. W. Bush paid a call on President Obama at the White House and effectively allowed the current occupant to take advantage of them via this photo which the White House promptly posted on Flickr.
Word is the Bushes were in DC to attend the super-exclusive Alfalfa Club dinner tonight that the President will also attend. No one will say why father and son Bush visited the White House or what they talked about.
But they did give the President an unnecessary photo opportunity. On the eve of the Florida primary, he gets to look non-partisan and they participate in the ploy.
George H. W. Bush has always had a goofy make-nice gene. But I didn't know that it extended to Jeb as well. Why play into the hands of someone who has attempted to batter you and denigrate your accomplishments -- and would gladly do it again once you're out of his sight?
Beats me.
Posted by Dan Cirucci at 6:01 PM

If you feel that Jeb and HW accomplished absolutely NOTHING -- that neither one of them did any good whatsoever and never accomplished anything in his life -- then it's useless to try to argue with you.