Pope Warns Of Renewed Threats To The Family 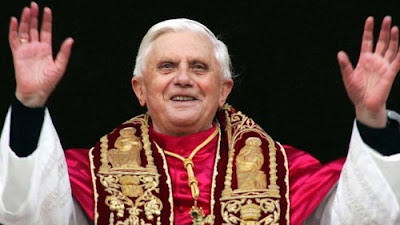 Yesterday, in his annual address to cardinals, bishops and priests Pope Benedict XVI spoke strongly about the endangered plight of the family and the family's importance to faith, civilization and the future of humankind.

Here is part of what the Holy Father said:


Despite all impressions to the contrary, the family is still strong and vibrant today. But there is no denying the crisis that threatens it to its foundations – especially in the western world. It was noticeable that the Synod repeatedly emphasized the significance of the family as the authentic setting in which to hand on the blueprint of human existence. This is something we learn by living it with others and suffering it with others. So it became clear that the question of the family is not just about a particular social construct, but about man himself – about what he is and what it takes to be authentically human. The challenges involved are manifold.

First of all there is the question of the human capacity to make a commitment or to avoid commitment. Can one bind oneself for a lifetime? Does this correspond to man’s nature? Does it not contradict his freedom and the scope of his self-realization? Does man become himself by living for himself alone and only entering into relationships with others when he can break them off again at any time? Is lifelong commitment antithetical to freedom? Is commitment also worth suffering for? Man’s refusal to make any commitment – which is becoming increasingly widespread as a result of a false understanding of freedom and self-realization as well as the desire to escape suffering – means that man remains closed in on himself and keeps his “I” ultimately for himself, without really rising above it. Yet only in self-giving does man find himself, and only by opening himself to the other, to others, to children, to the family, only by letting himself be changed through suffering, does he discover the breadth of his humanity. When such commitment is repudiated, the key figures of human existence likewise vanish: father, mother, child – essential elements of the experience of being human are lost.

The Chief Rabbi of France, Gilles Bernheim, has shown in a very detailed and profoundly moving study that the attack we are currently experiencing on the true structure of the family, made up of father, mother, and child, goes much deeper. While up to now we regarded a false understanding of the nature of human freedom as one cause of the crisis of the family, it is now becoming clear that the very notion of being – of what being human really means – is being called into question. He quotes the famous saying of Simone de Beauvoir: “one is not born a woman, one becomes so” (on ne naît pas femme, on le devient). These words lay the foundation for what is put forward today under the term “gender” as a new philosophy of sexuality. According to this philosophy, sex is no longer a given element of nature, that man has to accept and personally make sense of: it is a social role that we choose for ourselves, while in the past it was chosen for us by society.

The profound falsehood of this theory and of the anthropological revolution contained within it is obvious. People dispute the idea that they have a nature, given by their bodily identity, that serves as a defining element of the human being. They deny their nature and decide that it is not something previously given to them, but that they make it for themselves. According to the biblical creation account, being created by God as male and female pertains to the essence of the human creature. This duality is an essential aspect of what being human is all about, as ordained by God. This very duality as something previously given is what is now disputed. The words of the creation account: “male and female he created them” (Gen 1:27) no longer apply. No, what applies now is this: it was not God who created them male and female – hitherto society did this, now we decide for ourselves. Man and woman as created realities, as the nature of the human being, no longer exist. Man calls his nature into question. From now on he is merely spirit and will.

The manipulation of nature, which we deplore today where our environment is concerned, now becomes man’s fundamental choice where he himself is concerned. From now on there is only the abstract human being, who chooses for himself what his nature is to be. Man and woman in their created state as complementary versions of what it means to be human are disputed. But if there is no pre-ordained duality of man and woman in creation, then neither is the family any longer a reality established by creation. Likewise, the child has lost the place he had occupied hitherto and the dignity pertaining to him.

Bernheim shows that now, perforce, from being a subject of rights, the child has become an object to which people have a right and which they have a right to obtain. When the freedom to be creative becomes the freedom to create oneself, then necessarily the Maker himself is denied and ultimately man too is stripped of his dignity as a creature of God, as the image of God at the core of his being. The defence of the family is about man himself. And it becomes clear that when God is denied, human dignity also disappears. Whoever defends God is defending man.