Review: Hyde Park On Hudson With Bill Murray As FDR 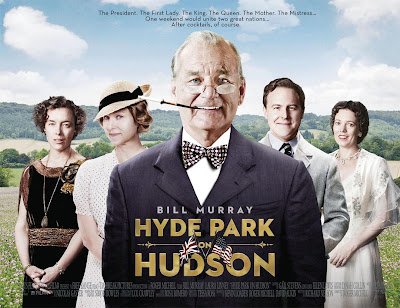 In my lifetime there have only been two U. S. Presidents who could be described as charming.
Both were great speakers; both were masters of the media; both were natural performers and both were the targets of assassination attempts.
There's no telling what John F. Kennedy's legacy would have been had he survived but we do know this: He will forever remain the epitome of charm, style and grace.
Fortunately, Ronald Reagan did survive to serve two terms and his wit, charm and elegant manner are intertwined not just with his years of service to our nation but with his time as a Hollywood heartthrob as well.
Let's face it: Both guys were charismatic.
So to was Franklin Delano Roosevelt.
But Roosevelt's charm offensive was complicated by his disability. At the age of 39, polio confined him to a wheelchair. Despite this, FDR still managed to be as charming as he was before his disability, if not moreso.
FDR turned a possible negative into a positive.
How he did it is part of what the new film Hyde Park On Hudson is all about.
In an impressive performance by Bill Murray we find an FDR who is now all too human and refreshingly vulnerable. And he knows he's vulnerable. But rather than playing for pity, Roosevelt treats his disability with a wink and a nod. And this proves to be catnip to all those who enter his domain. In his presence, men (even the King of England) are inspired to do better than their best. And women feel an attraction that makes them want to protect, nurture and, yes -- pleasure FDR all at once. In fact, he proves to be so irresistible that gals young and old willingly share him. And history books seem to verify this.
To be sure, much of this was all wrapped up in the intoxicating allure of power. And no one exuded power like Roosevelt.
But FDR was also a master manipulator who played to an audience of one or one million with a deft touch. Yet, to speak as easily to one million as you would to one means you'd more likely trade the one for the million, knowing that another one will surely come along.
So, as with all charismatic personalities intimacy was not in Roosevelt's repertoire. That would involve flying too close to the sun and that would also destroy the illusion. So those who sought an exclusive or even "special" relationship with this crafty old poker player were almost always disappointed. And if they persisted, some were hurt or even permanently wounded.
That is the story that is told in this evocative film that traces the dalliance between FDR and his distant cousin Margaret Stuckley, all centered around a weekend in 1939 when the King and Queen of the United Kingdom visited FDR at his family homestead in upstate New York.
I must warn you: the movie unfolds v-e-r-y  s-l-o-w-l-y. There's so much anticipation in this rather self-absorbed costume drama that at times you may wonder whether anything at all is ever going to actually happen. But things do happen in accordance with the somewhat tedious customs and mores of the particular time and place.
Still, even though King George VI turns up in this movie, this is not The King's Speech. It lacks the pacing, style and engrossing story the earlier film. The story here is too puny. There just isn't enough movie here to make it a Major Motion Picture.
But Bill Murray's performance as FDR is almost certain to gain an Oscar nomination and Laura Linney, Samuel West, Olivia Colman, Elizabeth Marvel and Elizabeth Williams also give fine performances.
Big characters, tiny tale.