Which US Presidents Have Played Santa Claus? 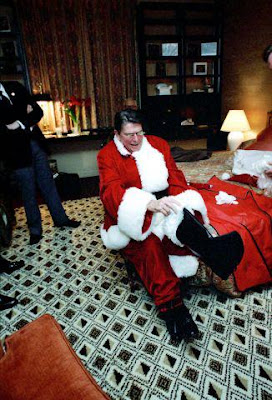 It's not exactly typical for the President of the United States to don a Santa outfit and appear as Santa Claus. It takes a leader who's not too vain -- someone who's secure in his own skin -- to pull it off.
Only four US presidents have ever played Santa Claus.
Shown above is one of them.
Yes, Ronald Reagan played Santa Claus. The other three were Teddy Roosevelt, William Howard Taft and Dwight D. Eisenhower.
Notice that they were all Republicans.
Now, that doesn't necessarily mean that Democrat presidents don't act as Santa Claus -- they do. In fact, they give lots and lots of "gifts" away not just at Christmas but all year long, every day, 365 days a year. But they do it all with your tax money. In effect, you act as Santa Claus for them.