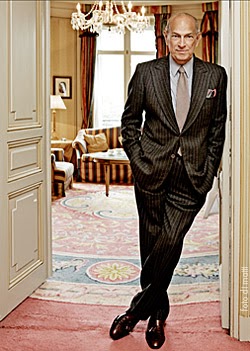 He was one of the last of the great, great fashion designers - part of an age that extended all the way back to fashion icons like Balenceaga, Chanel and St. Laurent.

He was Oscar de la Renta and he has died at the age of 82.

Born in Santo Domingo, Dominican Republic, de la Renta was actually trained by the great Cristóbal Balenciaga and Antonio del Castillo. He became internationally known in the 1960s as one of the couturiers to dress Jacqueline Kennedy. An award-winning designer, he worked for Lanvin and Balmain; his eponymous fashion house continues to dress leading figures, from film stars to royalty, into the 2010s. de la Renta is particularly known for his red carpet gowns and evening wear.

At the age of 18, de la Renta left the Dominican Republic to study in Spain, where he studied painting at the Academy of San Fernando in Madrid. He quickly became interested in the world of fashion design and began sketching for leading Spanish fashion houses, which soon led to an apprenticeship with Spain's most renowned couturier, Cristóbal Balenciaga. He always considered Balenciaga his mentor. Later, de la Renta left Spain to join Antonio del Castillo as a couture assistant at Lanvin in Paris.

In 1963, de la Renta turned to Diana Vreeland, the editor-in-chief of Vogue for advice, saying that what he really wanted was to "get into ready to wear, because that's where the money is". Vreeland replied, "Then go to Arden because you will make your reputation faster. She is not a designer, so she will promote you. At the other place, you will always be eclipsed by the name of Dior."[De la Renta proceeded to work for Arden for two years before he in 1965 went to work for Jane Derby and launched his own label.] When Derby died in August 1965 Oscar de la Renta took over the label.

From 1993 to 2002, Oscar de la Renta designed the haute couture collection for the house of Balmain, becoming the first Dominican to design for a French couture house.In 2006, the Oscar de la Renta label diversified into bridal wear.

Oscar de la Renta has had the distinct honor of having his designs worn by a diverse group of distinguished women and celebrities.

In 1977, de la Renta launched his fragrance, OSCAR, followed by an accessories line in 2001 and a homewares line in 2002. The new business venture included 100 home furnishings for Century Furniture featuring dining tables, upholstered chairs, and couches. In 2004, he added a less expensive line of clothing called O Oscar. De la Renta said he wanted to attract new customers whom he could not reach before.

In 2006 Oscar de la Renta designed Tortuga Bay, a boutique hotel at PUNTACANA Resort and Club. Tortuga Bay is a Leading Small Hotel of the World. and a member of Virtuoso.

De la Renta's talents received continual international recognition. Among them, he received the Council of Fashion Designers Designer of the Year Award in 2000 and in 2007 (tied with Proenza Schouler). In February 1990, he was honored with the CFDA Lifetime Achievement Award. King Juan Carlos of Spain bestowed de la Renta with two awards, the Gold Medal of Bellas Artes and the La Gran Cruz de la Orden del Mérito Civil, He is recognized by the French government with the Légion d'honneur as a Commandeur.

In February 2014, Oscar de la Renta recreated his entire Spring presentation, Designed for A Cure 2014 collection, to raise money for the Sylvester Comprehensive Cancer Center at the University of Miami Miller School of Medicine.

He was diagnosed with cancer in 2006. At the Council of Fashion Designers of America (CFDA) Executive Director Fern Mallis called him "the sultan of suave." At that event, he spoke of his cancer, saying,

"Yes, I had cancer. Right now, I am totally clean. The only realities in life are that you are born, and that you die. We always think we are going to live forever. The dying aspect we will never accept. The one thing about having this kind of warning is how you appreciate every single day of life."
Posted by Dan Cirucci at 11:03 PM