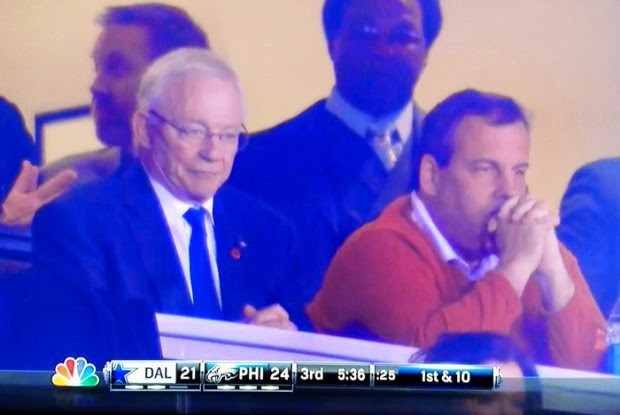 Last night New Jersey Governor Chris Christie joined the Dallas Cowboys as they came to Philadelphia to play the Eagles (aka 'Iggles).
And Christie sat in a sky box with Dallas Cowboys owner Jerry Jones and cheered on the Boys.
The Boys won and this drove Birds fans bonkers.
The game was critical and very well may have doomed the 'Iggles playoff hopes this year. Once again, a Philly team came up short and lost the Big One. Once again, Philly solidified its reputation as a hard-luck town. It's sad, we suppose. But it happens.
OK, forget all that.
Vitriolic green maniacs still needed someone to blame for their team's loss. They couldn't simply say "You won, we lost, you played better, nice game." They needed a scapegoat. So, they decided to trash Chris Christie.
Philadelphia City Councilman Jim Kenney  tweeted that Christie is "a fat assed . . . creep."

"Chris Christie is sitting on his very large ass next to Jerry Jones in his box at the Linc. You suck! Kissing Texas ass for 2016. Awful!," Kenney tweeted.
Later, Kenney added this: "Hey fat assed Christie, kiss Jerry Jones' ass in his box in Dallas. Not across the river from Philly. You are just a creep!"
Former Pennsy Governor and Philly Mayor Ed Rendell has also bashed Christie.
“How can a Jersey guy be a Cowboys fan? It’s pathetic,” said Rendell.
“It’s legal but it indicates a basic inferiority complex. If you are a Jerseyite or a Pennsylvanian and you’re rooting for the Cowboys, it means you’re not secure in yourself and you wanted to root for a team that was a team in your youth that was a constant winner.”
Well, yes Governor Rendell. Chris Christie was a fan of the Dallas Cowboys in his youth.
Chris Christie has always been a Cowboys fan and it's never been a secret.
Here's how the Governor explains it: “My father was a Giants fan and I used to remember watching him when I was eight, nine years old and every Sunday he would watch the Giants and yell at the TV set. I used to think to myself why would I want to root for a team that makes you angry? The Cowboys were really good.”
Makes sense to us.
In addition to that, Christie idolized legendary Dallas quarterback Roger Staubach, a true American hero. Hey, we could think of a lot worse people to idolize than Roger Staubach.
So, Christie became a fan of America's Team -- a truly national team that has fans not just all over the country but all over the world.
And Christie was drawn to a team that played its heart out -- played a great game -- and often won.
And Christie idolized an iconic quarterback whose record as a great player and outstanding American role model remains umblemished.
And Christie always rooted for this team in seasons when they went to the Super Bowl and in seasons when they went nowhere, whether they were up or down, in or out.
And Christie never made any bones about it. He never pretended it was otherwise.
He told Eagles fans. He told Giants fans. He told Jets fans. He said: "My team is the Cowboys." He did this just as he told Yankees fans that his team was the Mets. He was open, above-board, honest about it.
What the hell is wrong with that?
Doesn't every American kid have the right to pick whatever team he wants to call his own?
In fact, give Christie credit that as a kid growing up in the shadow of New York he dared to cheer on an arch rival team from the other side of the country just because he liked them more and thought they had a better team. It must not have been easy to be a Cowboys fan when you were living practically around the corner from Meadowlands Staudium.
And give him credit for this as well: He did not change his allegiance once he became famous and successful. He did not pander to New York or Philadelphia. Chris Christie is who he is. And his allegiances and loyalties are what they are -- they do not necessarily change to fit the circumstances or the latest passing fad or some expediency. The guy is real.
Which really makes some of the people who are attacking Governor Christie today look foolish and petty.
So, listen Eagles fans: Mind your own team and the manners and prejudices of your own town. Chris Christie can root for any team he wants and sit in any box in any stadium with whoever he wants. And so can you.
That's what makes horse races and neighborly rivalries and yes, football teams.
It's called America.