How We Devalued Washington And Lincoln 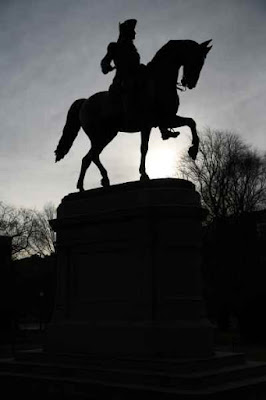 Quick: Why is today a holiday?
What do we observe today?
Why is the holiday February 16th this year when it was a different date last year?
Something to do with George Washington, you say? Or Abraham Lincoln? Or is it Presidents Day?
Do you know the traditionally accepted date of Washington’s birth? And what really is the relationship, if any, between Washington’s birthday and the birthday of Abraham Lincoln? It all seems rather murky. But a bit of investigation reveals an interesting tale.
According to calendars used since the mid 18th century, Washington was born on February 22, 1732. This date consequently became the generally accepted date for observances of Washington’s birth.
Public celebrations for George Washington's birthday actually predate his term as president, and were originally intended to honor his service in the War for Independence. By the early 19th century, Washington's Birthday had taken hold in the American experience as a full-fledged national holiday. Its traditions included Birthnight Balls in various parts of the country, speeches and receptions and revelry in taverns throughout the land.
The story of Washington’s life was widely taught and legends about Washington began to grow.
Then, Abraham’s Lincoln’s birthday, February 12, emerged as an important national event. The birthday of our 16th President was first observed in 1865, one year after his assassination. But Lincoln’s birthday was never officially declared a federal holiday as Washington’s was even though Lincoln’s birthday was an official holiday in several states.
For decades, February was a grand month for celebrating Washington and Lincoln, our two greatest Presidents. Schools, stores, banks, libraries and other public locations were festooned with portraits of Washington and Lincoln. The profiles of both men were instantly recognizable and stories of Washington and the cherry tree and Lincoln the railsplitter abounded.
Then, in 1968 Congress passed something called the Uniform Holidays Bill which made Washington’s Birthday a Monday holiday. Starting in 1971, the third Monday in February became Washington’s Birthday. It’s been that way for 44 years now.
But a funny thing happened along the way. Washington’s Birthday somehow became Presidents Day. Nobody declared it. Nobody proclaimed it. It just happened. And that’s what the third Monday in February has been called even though the federal government still officially lists it as Washington’s Birthday.
The result is that we now have a day that stands for nothing.
Some people actually think Presidents Day honors the current president. Some people think it honors all the presidents. Some people think it honors their own favorite president or presidents. Some people think it’s just a shopping holiday.
And the sad part is that school children seem to be as confused as anyone else. If you ask a kid today about something as basic as Washington crossing the Delaware or the legend of the cherry tree he or she would probably respond with total bewilderment.
And nobody seems to even understand how we got to this point. There has even been an urban legend that in 1971 President Nixon officially designated February 22 as Presidents Day. But it never happened.
So, here’s my solution. Let’s start celebrating February 22 as Washington’s Birthday again and give the father of our country his due. This means no disrespect to Lincoln or any other president. It simply recognizes the greatness of Washington and his paramount role in our history.
At a dinner honoring the centennial of Washington’s birth in 1832 Daniel Webster said that Washington’s legacy was nothing less than “the edifice of constitutional American liberty.”
It’s time to resurrect that legacy, acknowledge that edifice and restore George Washington’s rightful place in our national life.
Posted by Dan Cirucci at 9:55 AM