The Best Of Times - And the Worst As Well?

Is there a DACA deal? Or not?
This is Washington in the Trumpian, social media, post-party discipline age, Save Jerseyans, so it’s entirely possible that no one (including Twitter) knows for sure:
–
–
That’s not really the point though, is it?
You and I know that notwithstanding rhetoric from both sides, the Capitol Hill gang were never going to deport thousands of “dreamers” from the United States. Whether or not you’d support that, it was always illusory.
The real point: why were Democrats EVER so worried about Donald Trump? The existence or non-existence of a second/higher level of chess at work here isn’t relevant to the overarching point.
Thus far, Trump’s accomplishments have been largely (1) passive or (2) regulatory. He hasn’t succeeded in signing a single piece of major legislation in his first 8 months of office. The Wall hasn’t gotten off the ground (and, if some reports are to be believed, may never). Obamacare is still the law of the land. Tax reform remains elusive and far from possible. Now he’s holding dinner meetings with Democrat leadership and cutting GOP leaders out of the discussions.
And yet we endured nearly 9 months of the hard Left behaving as if the Antichrist’s reign of evil had taken hold. Screaming, crying, slandering, threatening and even marching in public with anatomical headgear. The overreaction began even before Trump finished taking his oath of office:
–
–
It was mostly for nothing.
The Left couldn’t stop hyperventilating long enough to listen (they’re emotional creatures), but I’ve been saying it since before Inauguration Day:
Trump is no conservative.
In fact, for all his good points, he’s the most liberal Republican president since… Roosevelt? Depending upon how you define liberal of course.
Superior to a criminal socialist like Hillary Clinton for a rock-ribbed man of the right such as myself?
Undoubtedly yes. By a mile.
But President Donald Trump isn’t an ideologue in the mold of Ronald Reagan either; he’s a businessman who, at the end of the day, wants to get things done. Almost anything done. So many people, even in the punditocracy who get paid for analyzing this stuff, still seem incapable of understanding the man’s psychology. The deal has value in of itself for a deal-maker. Trump made his bones building tangible monuments to his own greatness; the challenge with ideological conservatism for a guy like Trump is that restraint is central to the governing philosophy. You can’t hang a placard on a reduced deficit or a deleted tax bracket, can you?
This is why I ultimately pulled the lever for him in November but went in another direction back in June, during the primary cycle.
I assumed – and it turns out correctly – that the feckless Hill GOP wouldn’t work well with the Donald in the long run.
When they failed to give him what he wanted? The STUFF he wants? Tangible things, early and often? The long-time Democrat would revert to his somewhat “centrist” form in the interest of getting somethign done. Sure, he’ll throw a proverbial bomb from time to time over transgender military serve or the coal industry to make his base happy (remember… as I’ve said for two years now, his supporters are more culturally conservative than fiscally conservative/classically liberal), but on the big issues like debt, taxes, etc. and so on, Trump is willing to fire those who don’t advance his malleable agenda.
Trump is a brand. Everything else is salad dressing.
Republicans shouldn’t be surprised. Democrats shouldn’t be surprised either. 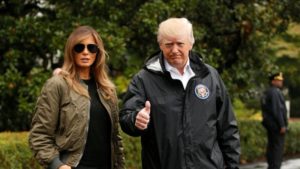 Why are they acting like it?
I think it’s complicated. Republican dysfunction is analyzed to death here and elsewhere. On the Democrat front, I suspect Trump’s centrist appeal, demonstrated by populist success in places like Michigan, Wisconsin and Pennsylvania, is considered a graver threat to Democrat decision-makers than the traditional Republican Southern-based electoral prospects. The Democrat base, like a healthy segment of Trump’s ’16 base, is quasi- or totally economically illiterate. It’s not polite to say but it’s true. Both sides are reacting to his social policy declarations and overlooking the many ways in which the incumbent GOP president is a far better option for self-styled “progressives” than the rest of the 2016 GOP field.
So relax, liberal Trump haters. From the looks of things? You’re going to survive the Trump years just fine. This is not your worst case scenario by any stretch of the imagination.
A message for angry, upset conservatives: spend less time complaining about Trump and more time building a stronger, better, effective conservative movement like Goldwater and Reagan before you. A weak movement helped create the conditions for all of this. Accept your role, own it, and move on.–
Posted by Dan Cirucci at 11:18 PM