His 'Final Days'? How Long Ago Was THAT? 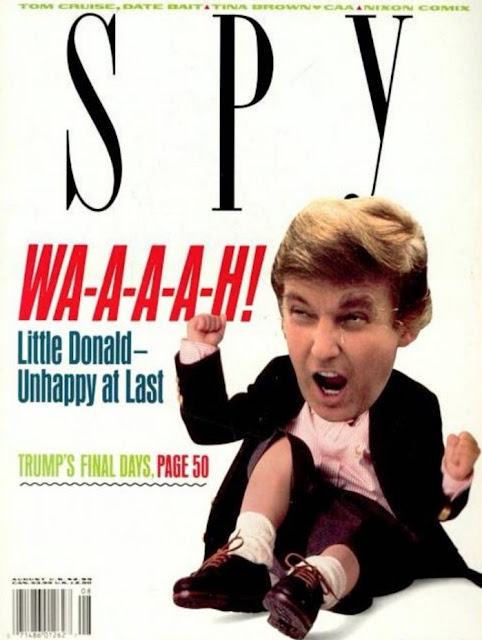 Look at the magazine cover above.
It's from SPY magazine - now defunct.
The magazine died. But Donald Trump is now President of the United States.
Yeah, "Little Donald" who was in his "final days" when this failed magazine was published is now the leader of the free world.
And, get this: the cover that declared The Donald over and done with is now nearly thirty years old! That's right, it was published in August, 1990.
There are lessons here that need to be learned:
1) Never believe the dominant media line on Donald Trump -- or anyone else who the media may find distasteful at any given time.
2) Beware of smirky, smarmy, presumptive and overwhelmingly liberal media types when they feed you this type of condescending garbage.
3) Remember that, above all, Donald Trump is a surviver. Not only has he mastered the game of survival -- he invented it!
4) Keep in mind that Trump thrives on chaos and controversy -- even (and maybe specially so) when he is the trigger for the chaos and the source of the controversy.
5) Trump isn't afraid of 'em. He's not afraid of the media, not afraid or conventional (aka Beltway) wisdom, not afraid of the deep state and not afraid of those who would presume to sit in judgement of him and all of the rest of us. His attitude is "Bring it on!"
Finally, this is a guy who, no matter how adverse things may seem, almost always manages to find a way to win in the end.
Posted by Dan Cirucci at 11:33 AM