Minimalism: A Look Into 'The Untroubled Mind'

This spring and summer (May 19 - October 14) the Philadelphia Museum of Art will present an intimately scaled installation featuring four paintings by Agnes Martin from the bequest of the late philanthropist, Daniel W. Dietrich II, a crucial supporter of the artist’s career. Three of these paintings date to the mid-1960s, and the fourth to 1985. They will be exhibited with additional works on paper and sculpture that Dietrich collected. This installation will explore the ideas that inform Martin’s minimalist art, and reflect upon the enduring friendship that existed between a major artist and her patron. 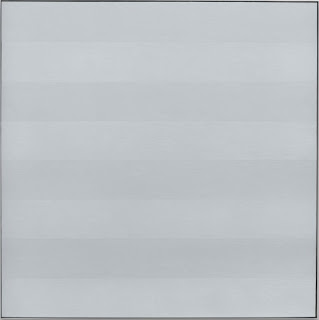 Timothy Rub, The George D. Widener Director and Chief Executive Officer, said: “Dan was a generous philanthropist and an admirer and avid collector of Martin’s work. He supported her first major mid-career retrospective in 1973 at the Institute of Contemporary Art here in Philadelphia. From that seminal moment onward, he continued to champion her work and added superb examples to his private collection. This installation provides a unique opportunity to understand the nature of Martin’s contribution to contemporary art and to understand how aspects of Dietrich’s transformative gift fit so well into our collection.”

Martin created each of the paintings that will be on view—Leaf (1965), Play II (1966), Hill (1967) and Untitled #6 (1985)— using acrylic paint and graphite. These works, each six-feet square, will be complemented in the installation by another painting in the collection of the Philadelphia Museum of Art, The Rose (1965), a centennial gift of the Woodward Foundation in 1975, of the same medium and size.

The drawings included in this installation, such as The Sea/Ocean Water (1960), attest to Martin and Dietrich’s cordial relationship, as Martin dedicated the work to Dietrich. In addition to the works of art, archival materials of notes and correspondence between artist and patron will be included.

About Agnes Martin (1912 – 2004)
Born in Canada, Agnes Martin moved to the United States in 1931. She received her B.S. degree from Teachers College, Columbia University, in 1942, and her M.A. in 1952. Martin’s minimalist compositions include grids and stripes in pale colors on a square format. Her work has been included in exhibitions around the world, among them the Institute of Contemporary Art at the University of Pennsylvania (1973); Stedelijk Museum, Amsterdam (1991); Whitney Museum of American Art, New York (1993); Dia: Beacon, New York (2004); Tate Modern, London (2015); Kunstsammlung Nordrhein-Westfalen, Düsseldorf (2015–16); Los Angeles County Museum of Art, and the Solomon R. Guggenheim Museum, New York (2016). Among the many awards that Martin received were the Skowhegan Medal for Painting (1987), the Golden Lion for Lifetime Achievement at the Venice Biennale (1997), National Medal of Arts from the Office of the President (1998), and the Lifetime Achievement Award from the Women’s Caucus for Art (2005).

About the Daniel W. Dietrich II Bequest
Dietrich’s remarkable bequest of American art came to the Philadelphia Museum of Art in 2016. It is rich in works of American art from the nineteenth and twentieth centuries by key figures such as Thomas Eakins, Albert Pinkham Ryder, Charles Demuth, Marsden Hartley, Horace Pippin, Edward Hopper, Edwin Dickinson, Philip Guston, Eva Hesse, Agnes Martin, Paul Thek, and Cy Twombly. In addition to this bequest, the Museum received an endowment gift of $10 million from the Daniel W. Dietrich II Foundation that supports the work of the Museum’s Contemporary Art Department, including new initiatives such as the establishment of the Daniel W. Dietrich II Fellowship in Contemporary Art.

About Daniel W. Dietrich II
Daniel W. Dietrich II lived in Chester County, Pennsylvania. He maintained a lifelong interest in the arts, including theater, music, film, literature, and the visual arts. He was a longtime supporter of the Philadelphia Museum of Art, was a member of the Anne d’Harnoncourt Society and served as a member of the Museum’s Contemporary Art Committee. He also provided significant support to many other cultural institutions, including the Institute of Contemporary Art in Philadelphia and the Association for Public Art.

This lecture considers the role of biography in the context of interpreting the work of artists. A talk by Nancy Princenthal—art critic and author of Agnes Martin. Her Life and Art, a monograph published in 2015—will touch upon questions that pervade the relationship between the private life of an artist whose work has gained public stature.
Posted by Dan Cirucci at 9:02 PM