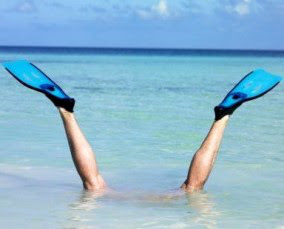 What the hell is going on here?
All of a sudden everyone's taking a DEEP DIVE!
The phrase has become ubiquitous. We can't get away from all these deep dives.
Deep dive is described as "a technique used to rapidly immerse a group or team into a situation for problem solving or idea creation." Used for that purpose, the phrase is actually trademarked.
But then Stanford University describes deep dive as a "system to extract value from dark data. Like dark matter, dark data is the great mass of data buried in text, tables, figures, and images, which lacks structure and so is essentially unprocessable by existing software." So, that makes deep dive one of these nebulous, nerdy inventions.
But those are not the ways that we most often hear deep dive being used.
We're now hearing it used mostly to describe an in-depth examination or analysis of a topic. We say "mostly" because we're also hearing it used in other ways. For example, binging on episodes of Seinfeld or Game of Thrones might be described as a deep dive. And becoming obsessed with someone might be called taking a deep dive into the world of that person -- which makes it a bit creepy. And, of course, how can we avoid the fact that Mueller's investigation increasingly seems to be a very deep (and endlessly protracted) DIVE?
We're going to be very direct, here. When we first heard this phrase we sensed something murky about it -- something vaguely obscene. It's more than a deep dive into a swamp -- much more.
And we were right. On further examination, we also find that the Urban Dictionary describes deep dive as "the art of giving a deepthroat  . . . " Well, you can figure out the rest of that sentence. We won't go any further.
We don't like the phrase deep dive.  We're tired of hearing it -- tired of it already.
It's crude and messy and way, way too descriptive for us.
The solution? Deep flush it!
Posted by Dan Cirucci at 12:19 PM