The Power Of Music And 'The Crisis Of Faith'

Of all the things he accomplished in his life, legendary composer, conductor and social activist Leonard Bernstein took pride in one achievement above most others -- his series of Young People's Concerts and the work he did to introduce new generations to music and culture.
"He was very passionate about that," his daughter Nina said at the preview of Leonard Bernstein, The Power of Music at the National Museum of American Jewish History in Philadelphia. 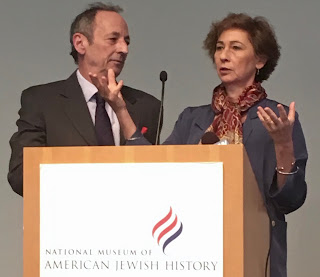 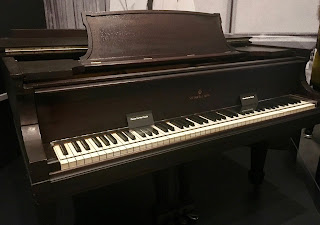 The interactive exhibition marks the 100th anniversary of Bernstein's birth and is part of a year long celebration that his family has been planning for "about five years" according to Nina Bernstein Simmons and her brother, Alexander. The show opens on Friday and continues through September 2 before traveling to other cities.
Here are some of the other things we learned from Nina and Alexander during their visit to Philadelphia:
--Leonard Bernstein was a devoted and attentive father who would periodically leave his three children love notes which were slipped under their bedroom doors at night.
--Bernstein's iconic musical, West Side Story was originally called EAST Side Story because it began as a story of Jewish and Catholic gangs fighting on New York's lower east side. But Bernstein and his collaborators decided that such a story too closely reflected their own experiences and the experiences of their parents so the tale was updated to a story of white and Puerto Rican gangs clashing on the west side of Manhattan. 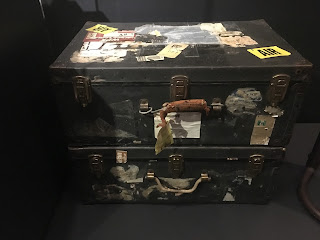 --The family felt one of the most hurtful slaps at Bernstein and his commitment to liberal causes came in the 1970 essay by Tom Wolfe which proclaimed the maestro and other left-leaning elites part of "radical chic" movement. Though the phrase stuck, it never sat well with the Bernsteins.
--Bernstein did not like being pegged as a composer of Broadway music or classical music or any particular brand of music, for that matter. He loved all music. "He wanted to do it all and he wanted to do it all well, and that's exactly what he did," Nina Bernstein Simmons commented. 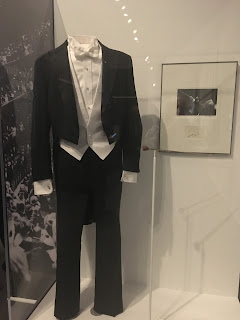 --Leonard Bernstein might not be entirely comfortable with today's technology. In fact, according to Alexander Bernstein, his father was not particularly tech-savvy and didn't really get along with technology. Might he be making music today on an iPad or similar instrument? "Not likely," Alexander said.
--All three of Leonard Bernstein's children took music lessons and all three attended Harvard, their father's alma mater. Of the three, only Jamie Anne Marie Bernstein pursued a career involving music.
--More than 2,000 events are planned all over the world to commemorate Leonard Bernstein's centennial year.

Photos (from top)
Alexander Bernstein and Nina Bernstein Simmons at the opening in Philadelphia
One of Bernstein's first pianos, a Steinway
Bernstein's traveling cases which held his musical compositions
The maestro's custom-tailored white tie and tails
Bernstein's reading glasses and one of his Grammy awards.

All on display at the National Museum of American Jewish History.

Leonard Bernstein: The Power of Music is the first large-scale museum exhibition to illustrate Leonard Bernstein’s life, Jewish identity, and social activism. Audiences may be familiar with many of Bernstein’s works, notably West Side Story, but not necessarily with how he responded to the political and social crises of his day. Visitors will find an individual who expressed the restlessness, anxiety, fear, and hope of an American Jew living through World War II and the Holocaust, Vietnam, and turbulent social change—what Bernstein referred to as his “search for a solution to the 20th‐century crisis of faith.”
The exhibition explores his Jewish identity and social activism in the context of his position as an American conductor and his works as a composer. It features interactive media and sound installations along approximately 100 historic artifacts, including Bernstein’s piano, marked-up scores, conducting suit, annotated copy of Romeo and Juliet used for the development of West Side Story, personal family Judaica, composing easel, and a number of objects from his studio.
Posted by Dan Cirucci at 5:59 PM