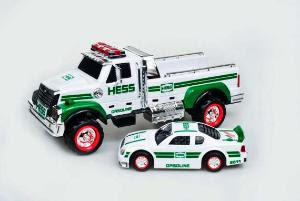 The 2011 Hess Toy Truck is at Hess gas stations now.
This year's version of the truck carries a race car and, for the first time in the nearly 50 years since the first Hess trucks came out, both vehicles have lights and sounds.
The truck, requires two C batteries, has 34 lights with flash settings; sounds for ignition, horn and back-up alert, and a pull-out ramp with automatic hydraulic sound. It's quite sophisticated.
The car needs two AA batteries and is modeled after an American stock car. It has 10 lights and an engine sound effect.
The truck (with the car) sells for $26.99.
Hess has been selling these toy trucks since the early 1960s when the company's founder, Leon Hess decided that he wanted to provide a fun, high quality and affordable toy for families during the holiday season.
The first truck was introduced in 1964. It was a tanker that could be filled with water and emptied through its delivery hose. It retailed for $1.29, including batteries. The truck was obviously a great value and beca,e an instant success. Hess stations couldn't keep the thing in stock.
Great attention to detail and their limited availability have made the Hess trucks highly desirable. Now, collectors are a big part of the annual sales.
The Hess truck maintains the original commitment of Leon Hess. Over the years, models have included fire engines, helicopters, a police car, an airplane, and even a space shuttle. Each year the truck is introduced with a distinctive holiday TV commercial.
Today, the Hess toy truck has become a lasting family tradition that extends across generations.
BTW: If you have that first 1964 truck (the one that sold for $1.29) and it's in mint condition and still in its original box, you should know that it now commands $1,600.
Click here for more information.
Posted by Dan Cirucci at 10:40 PM