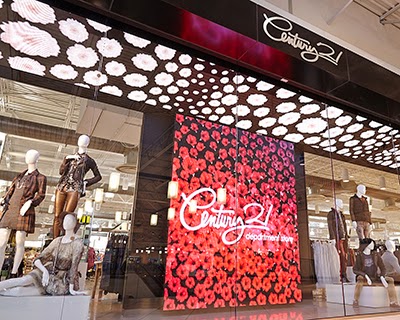 Recognizing PREIT's transformative vision for The Gallery and the value of the location in the heart of Philadelphia, where mass transit, tourism, the residential population and employment base converge, Century 21 has chosen the site as the location for the chain's first venture outside of the New York market.

"Century 21 is the ideal brand to change the retail landscape of this city and attract new shoppers to the Market East corridor and more exceptional first-to-region retailers to the project."

"For over 50 years, we've been a destination within the New York market for high-end fashion consumers looking for incredible values, and now we're excited to share our unique shopping experience with the city of Philadelphia. Century 21 is proud to become a part of the Philadelphia community as well as the newly re-launched Gallery."

Century 21 is an iconic New York-based retailer known for its legendary and exceptional offering of designer label and brand name merchandise sold at unbelievable prices. A quality fashion leader for over 50 years, Century 21 is known for its trendsetting styles and first quality assortment of merchandise.

The new Philadelphia store will reportedly inhabit the first two floors of the old Strawbridge's store at 8th & Market, anchoring The Gallery which stretches to 11th & Market. It is expected to open in October.

About Pennsylvania Real Estate Investment Trust
PREIT is a real estate investment trust specializing in the ownership and management of differentiated retail shopping malls designed to fit the dynamic communities they serve. Founded in 1960 as Pennsylvania Real Estate Investment Trust, the Company now owns properties in 12 states in the eastern half of the United States with concentration in the Mid-Atlantic region and Greater Philadelphia. The Company's current portfolio is comprised of 35 shopping malls, seven other retail properties, and three development sites totaling 45 properties and 30.4 million square feet of space. PREIT is headquartered in Philadelphia, Pennsylvania, and is publicly traded on the NYSE under the symbol PEI. Information about the Company can be found at www.preit.com or on Twitter or LinkedIn.

About Century 21 Department Store
Century 21 Department Store, established in 1961, is legendary for its exceptional offering of pure designer merchandise in every category at 40-65% off retail every day. A leader in high-end fashion retail for over 50 years, Century 21 Department Store offers men's, women's and children's apparel, footwear, outerwear, lingerie and accessories along with cosmetics and home goods at select stores. In addition to its soon-to-be Philadelphia location, the retailer is headquartered in Downtown Manhattan, with four other locations in New York including Lincoln Square, Brooklyn, Queens, Long Island and three additional locations in New Jersey including Paramus, Morristown and Elizabeth, as well as online at C21Stores.com.
Posted by Dan Cirucci at 4:53 PM