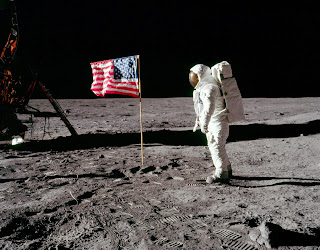 At 10:56 P.M. EDT, Sunday, July 20. Astronaut Neil A. Armstrong, spacecraft commander of Apollo 11. set foot on the moon. His descent from the lowest rung of the ladder which was attached to a leg of the lower stage of the Lunar Module {LM), to the footpad, and then to the surface of earth's only natural satellite constituted the climax of a national effort that began in 1961. It was an effort that involved, at its peak, more than 300,000 people in industry, the universities and in government.

As he took his epochal step, Armstrong commented "Thats one small step for a man, one giant leap for Mankind."

Sharing this electric moment with Armstrong and Edwin "Buzz" Aldrin, the LM pilot, were an estimated half-billion TV watchers in most of the earth's nations. As the astronaut descended the ladder, he pulled, a "D" ring that deployed a black and white television camera which was focused to record the event. Framed by parts of the LM's under-carriage, Armstrong's heavily-booted left foot descended across millions of TV tubes until his boot sole made contact.

With the post landing checks completed, Armstrong climbed out of the LM and descended to the lunar surface. The moon walk began more than five hours ahead of schedule as a result of deciding not to have a rest period on schedule. Armstrong's attention was first directed at the nature of the surface material. He reported that the top layer was a fine, powdery material. He noted that he sunk in only a quarter of an inch or less, and that the footpads of the LM, which are convex discs 32 inches in diameter, had penetrated only a few inches. He also observed that the exhaust of the descent engine had not cratered the area directly below the LM engine nozzle.

After a quick visual check of the LM, Armstrong went ahead with his scheduled task of collecting the contingency sample - several pounds of lunar surface material which he stowed in a spacesuit pocket. In the course of his collecting, he noted that as he dug down five or six inches below the surface, he encountered hard, cohesive material. Armstrong had been assigned this collection as a first task to make sure that there would be samples aboard in case an early abort of the mission was necessary.
Posted by Dan Cirucci at 7:36 PM