Consider The Current Plight Of The Democrats . . . 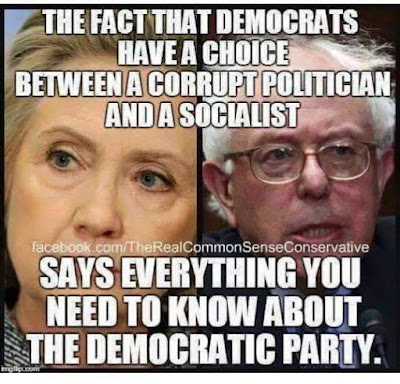 Consider where the Democrats stand today.
They've got a narcissistic, lame-duck party, go-it-alone leader (aka POTUS) who's approval rating consistently hovers in the lows 40's.
They're deeply in the minority in the House, the Senate, among Governors and among state legislatures throughout the nation.
Their frontrunner for President is a failed presidential aspirant who's almost 70 years-old and who's also under federal investigation.
Her closest competitor for the nomination is a 73-year-old self-avowed Socialist who's not even a member of the Democrat Party.
Two other possible aspirants include a 77-year-old defeated presidential candidate (Jerry Brown) and and a 72-year-old Vice President (Joe Biden) who has also sought the post before and lost.
Combined age of possible future Democrat Party leaders: 291 years!
On top of all this, the Democrats' congressional leaders, Nancy Pelosi and Harry Reid are both 75 years-old.
The Democrats have no bench.
They have no future! None!
Posted by Dan Cirucci at 6:05 PM