What The Hell Happened To Jeb Bush? 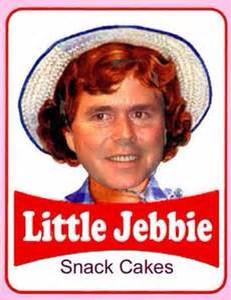 What the hell happened to Jeb Bush?
Here's a guy who was supposed to be the immediate frontrunner for the 2016 GOP nomination.
He started with instant name-recognition, certified establishment backing, a sense of the heir apparent, an admittedly great record as Governor of Florida, zillions of dollars in donations, a big organization and what would seem to be an obvious leg up.
And so far he's does nothing but squander it.
What's the problem?
To begin with, Jeb has been less than inspiring. In fact, he's been boring.
He's coming off as somewhere between a nerd and a policy wonk. Wait, we don't wanna insult nerds. And, he'd have to show us he's better informed (or faster with his delivery, we suppose) to be a certified wonk.
No, he's coming off as an either/or guy -- the type of guy who says "Well, on the one hand; but on the other hand . . . "
That's boring.
This is definitely not the kind of guy you would want to have a beer with. And God forbid that you might have to sit through an entire dinner with him. Yawn . . . .
And, this too -- those outdated granny glasses that he wears make him seem old and professorial.
Jeb seems self-conscious and awkward and even testy lately.
He needs to be more spontaneous; more lively; more comfortable in his own skin.
We need to get a sense of a genuine person -- someone who really is running for president and who knows who he is and why he's running. We need a Jeb Bush who's unapologetically himself; who's not running away from himself or anyone or anything else; who doesn't look like a deer in headlights.
Hey, overall we've got nothing against the guy or his family. We like 'em.
But Jeb, C'mon -- get your act together!