Villanova University today announced that Mark Jackson has been appointed the school’s Director of Athletics.

Jackson, who most recently served as the Senior Associate Director of Athletics and Chief Innovation Officer at the University of Southern California (USC), succeeds Vince Nicastro, who held the position for 15 years. Jackson will officially start on September 21. 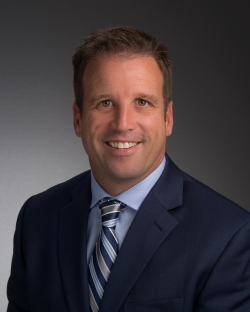 “Our search centered on finding an individual who believes in the values and mission of Villanova University, understands the changing landscape of college athletics, and possesses the skills necessary to sustain and grow Villanova’s success—athletically, academically and administratively—now and in the future,” said the Rev. Peter M. Donohue, OSA, PhD, Villanova University President. “Mark quickly distinguished himself as an energetic, visionary leader who possesses the experience, leadership skills and character traits we were seeking, making it clear that he is the right choice for this role.”

“Mark Jackson was an incredible asset to the Trojan family and, while we are sad to see him leave Los Angeles, Villanova University has hired one of the best young minds in collegiate athletics today,” remarked Pat Haden, Director of Athletics at the University of Southern California. “Mark has been an integral member in continuing our winning traditions in the classroom and on the field. His enormous impact on developing and implementing strategic plans, fundraising and managing our staff cannot be overstated.”

“I am truly humbled and honored to have the opportunity to lead Villanova Athletics under the guidance of Father Donohue,” said Jackson. “Villanova is an elite academic institution with a prestigious athletic brand, and I understand the responsibility I now have to uphold Villanova’s high standards for excellence. My wife, Tricia, and I are eager to immerse our four children into a campus community that represents so many of the values we try to instill in our children. I can’t wait to get started.”

With nearly 20 years in collegiate and professional sports, Jackson’s overall experience demonstrates a comprehensive knowledge and understanding of all sports and the associated support that is necessary to sustain a high-level collegiate athletic program. At USC, he had responsibility for the university’s flagship football program along with baseball, women's lacrosse and support services, including sports medicine, strength and conditioning, nutrition, security and equipment and apparel operations. During his tenure at Syracuse University, Jackson handled all aspects of athletic administration for 20 men’s and women’s programs.

Jackson possesses the proven ability to create additional revenues streams and direct high-value projects. He played a key role in a $300 million development campaign for the USC athletic department, and is considered a talented fundraiser. He oversaw the management, fundraising, design and development of $125 million in capital projects, in addition to the on-going multi-million dollar renovation of the Los Angeles Memorial Coliseum. At both USC and Syracuse, he was responsible for expanding the partnerships with key sponsors.

While at USC, Jackson also developed a strong relationship with the NCAA, assisting with the development of a robust compliance program on campus and working with NCAA senior leadership to plan and execute an annual Collegiate Sports Summit.

Jackson held a number of positions with sports-related organizations prior to his latest service at USC. He served as the director of football development with the Oakland Raiders. He was the vice president of athletic development at A2P Holdings, a sports marketing company. From 2005-2006, Jackson was the executive senior associate director of athletics at Syracuse University. He was promoted to assistant athletic director during his first term at USC, and served as an assistant coach and operations assistant with the New England Patriots.

Jackson was born in Boston and played defensive back on the football team at Colby College in Waterville, Maine. He has a bachelor’s degree in Government from Colby College, a master’s degree from Trinity College in Public Policy. Jackson and his wife are parents to four children.

Parker Executive Search was the lead consultant in Villanova’s search for a new Director of Athletics. A search committee, composed of board members, alumni, faculty and staff, oversaw the search process.

About Villanova University:
Since 1842, Villanova University’s Augustinian Catholic intellectual tradition has been the cornerstone of an academic community in which students learn to think critically, act compassionately and succeed while serving others.