Seventeen Years Ago Today: 'Yes, I Did' 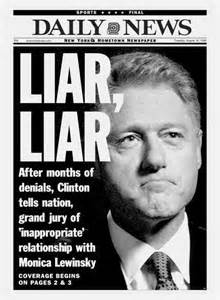 REMEMBER: Bill Clinton remains the only elected President of the United States ever to be impeached. He broke the law. He committed perjury, lying under oath to a grand jury.
This is a serious crime in any instance but it is an especially offense for a lawyer and an inexcusable offense for the President of the United States who is sworn and duty bound to uphold the law.
Clinton's law license was suspended by the Supreme Court of the State of Arkansas and he was fined $25,000 for "intentionally false" testimony under oath. He was disbarred by the United States Supreme Court and instead of contesting the disbarment, Clinton simply surrendered his license to practice law.
These are the facts.
No rewriting of history can change the facts.
Posted by Dan Cirucci at 2:05 PM