The World Meeting of Families - Philadelphia 2015 and the Philadelphia Prison System released photos highlighting progress on the handcrafted chair that will be presented as a gift to Pope Francis during his visit to the Curran-Fromhold Correctional Facility on Sunday, September 27th.
Designed by the Philadelphia Prison System staff and inmates, the commemorative chair is being carved out of a solid block of walnut, consisting of 10 foot planks milled to size. Over the last four weeks, the chair has begun to take shape and form through meticulous craftsmanship. Refinishing work is scheduled for next week. After the woodworking is completed, the upholstery process will begin and the finishing touches will be made in anticipation of Pope Francis' historic visit to Philadelphia. 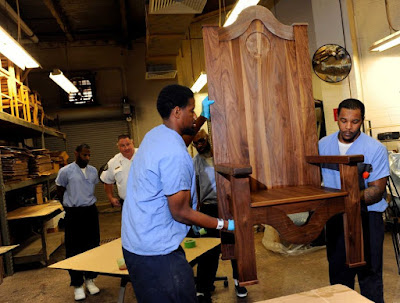 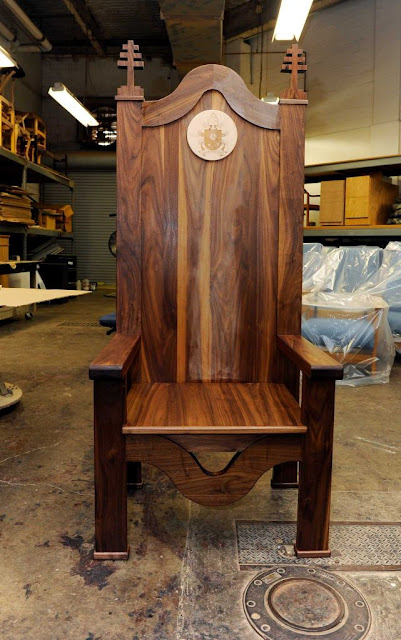 "We are delighted and grateful that our partners at the Philadelphia Prison System have taken it upon themselves to devote their time and energy into crafting this beautiful chair that will certainly be a welcome present for Pope Francis as he meets with inmates and their families," said Donna Crilley Farrell, Executive Director of the World Meeting of Families - Philadelphia 2015. "Embodying the theme of the World Meeting of Families - Philadelphia 2015, "Love is Our Mission: The Family Fully Alive, Pope Francis's ministry to those incarcerated and their affected family members that are too often overlooked, is truly inspiring and highlights the power of love and family as a source of sustenance and strength for all of us."

The chair is being developed by the PHILACOR program, the divisional name for ten industry shops located throughout the Philadelphia Prison System. With roots dating back to 1933, PHILACOR's mission is to nurture the professional growth of inmates through providing real life work experiences and skills to help prepare for post release employment. Selected based on excellent behavior, reliability and work ethic, the Carpentry Shop employs an average of 18 inmates daily and produces 70 completed pieces of furniture each month.

"Since learning that Pope Francis will be visiting the Curran-Fromhold Correctional Facility, the news has received a joyous and spirited reaction from our dedicated guards and staff, along with the prisoners we diligently serve and protect each day," said Louis Giorla, Commissioner of the Philadelphia Prison System. "I am also grateful that the Holy Father asked to include the families of inmates here in his visit. Families are often the collateral damage' of incarceration and his request to include these families shows his deep understanding of this dynamic. I know it will mean so much to so many."

For more information regarding the World Meeting of Families in Philadelphia, visit www.WorldMeeting2015.org.

For more information regarding The Holy See's Pontifical Council for the Family, which co-sponsors the World Meeting of Families, visit http://www.familiam.org/famiglia_eng/00002554_HOME_ENG.html.

About World Meetings of Families