Income Disparity? Plenty Of That Here! 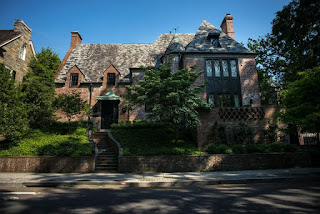 The man who is always lecturing us about "income disparity" and "income inequality" will move into a nine-bedroom, six million dollar mansion in Washington's trendy Kalorama section after he leaves the White House.
While he'll keep his substantial home in one of Chicago's most desirable neighborhoods, he'll rent the mansion at an estimated $22,000 per month.
Here's the way the New York Times describes the Obamas' new digs:


"The move will put the Obamas in one of Washington’s wealthiest ZIP codes, in a secluded precinct backing up to Rock Creek Park that is home to diplomats and a focal point of the capital’s cocktail-party circuit. The home itself is luxurious; photographs posted by Washington Fine Properties, which listed it when it sold in 2014, show spacious rooms with hardwood floors, white marble countertops, his-and-her master bathrooms and a terrace with formal gardens."

Ya gotta admit it, folks. This is classic liberal phoniness. Cry over income inequality and America's shortcomings while living the American Dream and remaining cosseted in the dearly beloved arms of the rich and powerful. Oh, yeah. That's nice!
Posted by Dan Cirucci at 12:22 PM