The Figures Just Get Better And Better . . . 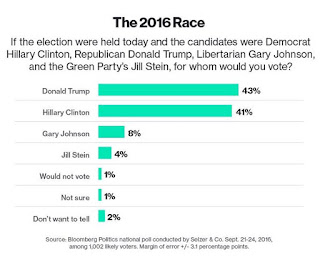 Well, this is the FOURTH national poll that now shows Trump clearly in the lead.
What you see above are the latest results from the Bloomberg Poll.
Trump also leads in the LA Times national poll (by FOUR points) in the Reuters poll (again, by FOUR points) and the Rasmussen poll by a whopping FIVE points.
The trend is clear.
Going into the debate, Donald Trump has all the momentum!
Posted by Dan Cirucci at 1:47 PM